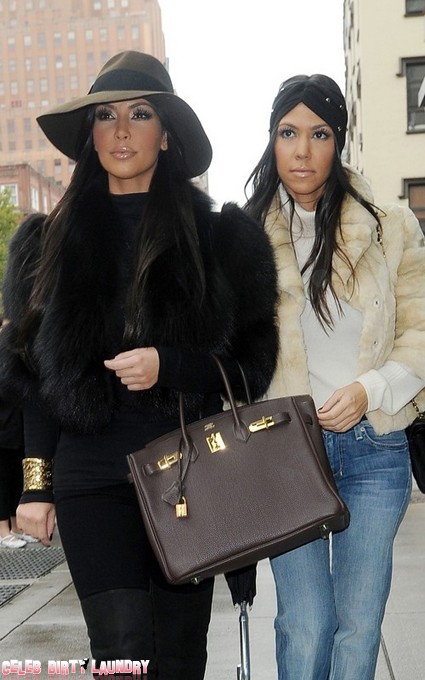 I cannot believe we are watching another Kourtney and Kim take New York – poor Rosie is a sucker for punishment.   Last week was a double header episode with episode 6 & 7 airing of the second season and we recapped it.

Tonight’s show is going to be really exciting, will it finally put those rumours to rest that Kim Kardashian married for publicity? One thing is for sure, she rushed into the marriage and tonight she admits it to her mom, Kris.

“My heart is telling me I did this too fast. I feel like this huge weight has been lifted off my shoulders since I’ve been here in Dubai. Being away from my husband … I’m back to myself. I’m enjoying this feeling. There’s something in my relationship that I just feel like isn’t right, I’m just learning a lot of things about him that I never knew before. Married life just isn’t what I thought it would be like with him.”

Official Synopsis: Family Therapy – Kim takes her frustrations with husband Kris Humphries out on her sisters and Scott. According to the New York Post, this episode was taped just two weeks before the infamous 72-day marriage ended when husband, NBA player Kris Humphries filed for divorce.

Mom Kris tries to give Kim some advice regarding her marital problems, but it’s not like she’s one to talk, now is it?

“Your dad and I were obsessed with each other, I didn’t want him to even go to work. I mean, I was so excited for at least 10 years … This is not normal, that you don’t want to go home to your new husband.”

Should Kim and Kris have gotten marriage counseling? Do you think it would have helped at all?  Tonight we will be live blogging at 10PM so come back then and read all the gory details.  In the meantime while you wait check out the sneak peek video below!

RECAP: Kim is back from Dubai, Kourtney comes in with her Mason to see them and Kourtney tells Kim that she had a talk with Khloe and she should speak to her. Kim feels that she has too much going on to deal with all the Khloe drama.

Kim walks into the room and Khloe is there visiting Kourtney and Scott and she doesn’t even look up to acknowledge that Kim is in the room.

Scott is going to try to get back in bed with Kourtney and Mason, he usually sleeps in his own bed. It doesn’t work and Scott leaves, goes back in his room, where Khloe is sleeping and pulls out the pull-out bed.

Khloe feels that Kourtney is not even going to try to fix her and Scott’s sleeping arrangements, so Khloe is going to step in to help.

Ever since Kim has gotten back from Dubai things are really weird between her and Kris, there is a definite power struggle. Kim tries to help Kris to organize his things and tells him that she has a hard time coping with the mess, she is constantly nagging him and the more she does, the more of mess he leaves behind.

Kim goes to dinner with her friend, Jonathan, she tells him that Khloe is on her last nerve, her tone is so crazy and he tells Kim that she is not going to change her. Kim kind of misses Khloe but doesn’t think she should bow down to her and apologize.

Khloe shows her mom a message Kim sent her on her phone where she called her ‘an evil little troll’. (wow, that gotta hurt since she looks different from the rest of the family) At a press conference, Kim sits away from her sisters for a lunch a break and her mother Kris tells her that she is acting like she is in high school. Personally, I think Kim is being a real bitch.

Kourtney things Kim is mad at Khloe because she never embraced Kim’s engagement or her marriage to Kris.

Kourtney is telling Scott that the fight between Kim and Khloe is no where near ending and Kris picks up for Kim and tells them that she loves her sister. Meanwhile, Kris’ attention is on Kourtney’s rockin’ Channel boots.

At dinner, Khloe tells Scott she is going to lock the bedroom door so he can’t get in and Scott confesses he doesn’t think he will be sleeping with his wife any time soon because she just wants to cuddle with her son.

Kim asks Kris to go out with her and Jonathan, she is trying really hard (according to her) to make things better between them but Kris doesn’t want to go. Meanwhile, Scott and Kourtney are at therapy, the therapists thinks there is more room between the two of them now. Scott wants Mason out of the bed, but doesn’t want Kourtney to hate him and to be crying every night while Mason sleeping down the hall.

Kim walks into a room where Khloe and Kourtney are already sitting and Khloe and Kim go at it again. Kim gives a ‘fake’ apology to Khloe and she refuses to accept it. (I would have done the same, what a bitchy fake apology from Kim).

Kourtney and Scott are at dinner and he tells her that people have to try to enjoy what they have because life is just going to pass them by.

It’s time for bed, Scott and Kourtney are going to give it on more shot. In the morning, Kourtney is shocked that Scott is still in the bed and he says he wished she wanted what he wanted, her. Scott thanked Khloe for helping him and his wife back in their bedroom.

At the Hurricane Club for dinner, Kourtney and Scott are all over each other and Kim is visibly uncomfortable with their over zealous attention for each other. Meanwhile, Kourtney feels that it is really awkward to be around Kris and Kim because there is a lot of tension in the air between them.

The next morning, Kourtney tries to be the mediator between Khloe and Kim and Kim doesn’t feel like there is anything to mediate about. Scott tells Kim that she was mean and Kim shouts out more of the ‘I’m sorry’ that is not sincere. Kim goes on to say that Khloe is threatened that Kris plays basketball (is she serious!). Khloe asks Kim why she would ever want to hurt her sister. Kim goes on to call Khloe ‘shady’ and Khloe walks out.

Kim will not own up to what she said in an email to Khloe and Kourtney thinks there are underlining problems with Kim that are causing her not to make up with Khloe.

Later, Kris and Kim are eating pizza and he tells her that he hates Khloe so he doesn’t want to get involved, but they are sisters so it will probably be over in a week anyway.

Kourtney tells Khloe that she walked out of the conversation yesterday because Kim was being rude.

Kris is going for a massage and Kim nags him about the shirt he is leaving before he leaves the apartment.

Kourtney and Scott are at lunch and he tells her that Kim should really be on cloud 9 right now because it is the honeymoon stage. Scott wants to help out, he wants everyone to start getting along. Later that night, Scott tells Kim that he feels like she is in a full blown family feud and she tries to blow him off, he tells her that her attitude basically sucks, she has too much going on and needs to sit back and enjoy life. Scott goes on to tell her that she is really negative, she used to be warmer and the sweetest person that has now grown into a cold person.

Kris continues his pampering and goes for a pedicure with a friend, who he tells that Kim is really acting strange since she returned from Dubai. When he returns home later, he finds Kim eating a veggie burger and the conversation is clearly strained between the two of them. Kris even asks Kim why she is acting so strange, but she denies that anything is wrong.

Kim approaches Khloe and asks to speak to her in private. Kim starts crying and says that she is so sorry for treating mean, it is just because she is so unhappy with her marriage. She goes on to tell her that she doesn’t like who she is in the marriage, she did it too fast and caught up in the fairy tale, she is not happy. Khloe understands and is very compassionate about the situation (boy she’s nice, I would have said I told you so because Kim deserves it) and tells Kim that a marriage is not rainbows and bunnies. Then Khloe asks Kim if she just wants to wait things out until they get back into L.A. and Kim says she doesn’t know. Kim finally realizes that her relationship with Kris has caused a huge problem with the relationships in her family.

In the end, Kim came across in this episode as being a selfish bitch and I don’t blame Kris for making her that way like she does, I think it is just her true personality coming out. What do you think, is this the real Kim Kardashian or is it all Kris’ fault?