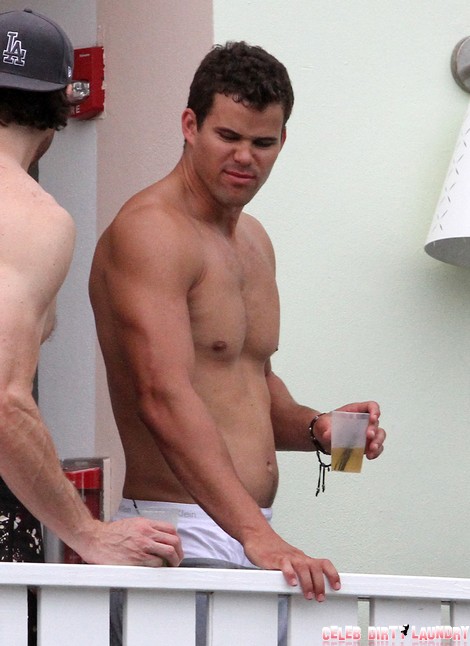 Kris Humphries once again disappoints those who thought he’d be the vessel to take down USS Kim Kardashian. That ship has long sailed and hit an iceberg as it’s obvious that he’s still hung up on Kim. Reportedly, he got his Kim lookalike girlfriend, Myla Sinanaj floatation devices otherwise known as breast implants.

After Kris’ 72 day marriage, which followed an over-the-top wedding featured on E! and cost $17 million, Kris became a national hero of sorts. There were those ready to pin medals to his chest for doing the world the service of hastening Kim’s backlash. For a while there, he was up to the task of exposing her antics to stay relevant but one year later, she rebounded with Kanye West for a chance of public redemption and he’s using his new bedmate as a Kim clone.

It’s one thing to have a type or preference but Myla is more or less a clone of Kim. Myla doesn’t seem to mind as she proudly flaunted her new chest in the Bahamas over the Thanksgiving holiday. Sources close to her have alleged that Kris paid for her new additions. The money should have been spent on lawyers who can actually finalize his divorce which has dragged on longer than the Lifetime movie, Liz and Dick.

If Kris isn’t going to be the one to end our long national nightmare for all things Kardashian, he’s prolonging his divorce for reasons only Dr. Phil can begin to understand. You can’t be openly hostile to Kim and threaten to torpedo her empire but simultaneously give your new girlfriend a makeover so she can resemble your legal spouse.

In the immortal words of philosopher Tyra Banks, we were all rooting for you, Kris. Granted, the public was cheering you on for the not so noble cause of Schadenfreude, but it’s the thought that counts and one can’t help but wonder what to think as Myla turns more and more into Kim with the help of a surgeon’s scalpel.