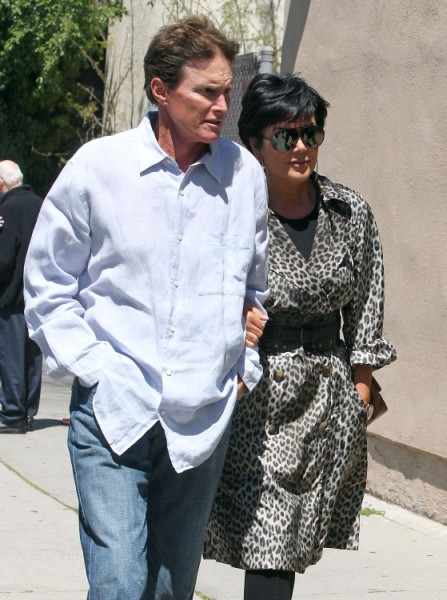 I’ll admit I’ve been a little hesitant on whether to jump on the Kris Jenner/Bruce Jenner divorce bandwagon. On the one hand it seems obvious. Bruce has got to be fed up with all of Kris’ nonsense and being stuck around Kardashian girls all day long is a penance I wouldn’t give to my worst enemy. But then… Bruce seems laid back. He seems like a pretty chill dude who could just as easily shake off his family’s excessive behavior and go about his business like nothing’s going on. Besides, you can’t trust those whily Kardashians.

But there are more signs that discord is in the air and they aren’t from tabloids!

Page Six reported that all was not merry with the family last night at the Clippers/Nuggets game. Khloe Kardashian, Kris, Kim Kardashian and Kanye West sat court side to watch Lamar Odom play whereas Bruce sat one row back in between two “gorgeous women”. Now, before we get all hysterical  let’s try to play devil’s advocate. Maybe Bruce doesn’t like having the best seats in the house. Maybe he likes a little elevation as opposed to the rest of the family which likes the attention of sitting front row. Maybe Bruce hates Kanye. Maybe Bruce wants to enjoy a game without Kris squawking in his ear. There are plenty of reasons why he’d want a little space! Because really, if they hated each other, would he really sit a row back inciting the gossip? Wouldn’t he sit farther away where people might not notice him or stay home all together? It just seems odd to me. Kris is nothing if not savvy. She had to have known what people would think by Bruce sitting in a different row so either she knows and she just doesn’t care or she is so over the relationship that she’s given up on trying to convince us they’re happy. And Kris Jenner doesn’t seem like the quitting type, does she?