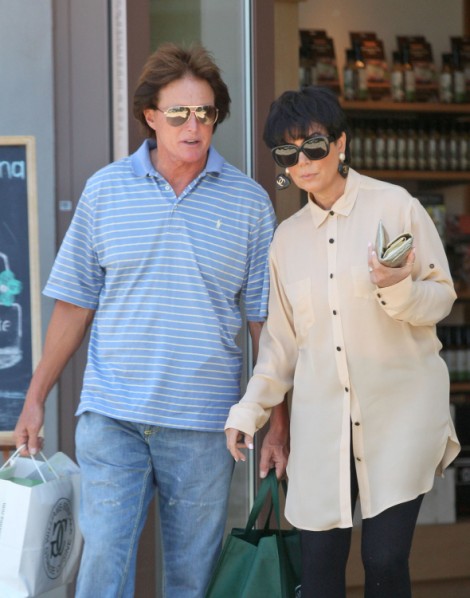 Because, really, what’s love got to do with it?

I have to admit, I thought this story was bullshit when I first heard about it months back. The kids all seem like they’re happy in the relationships and careers so that meant the tabloids had to pick on the parents if they wanted to squeeze any drama out of the Kardashians. But Radar Online and Blind Gossip have a similar story about how Bruce Jenner is quietly talking to lawyers about getting out of the marriage and taking his youngest daughters with him with as little collateral damage as possible. There’s only one problem. Kris Jenner’s holding on with an iron clad grip.

“Kris and Bruce are all but over,” a source told Radar Online. “They have grown apart and their relationship is all about business these days rather than love or romance. They’ve built a brand together though, and that’s very profitable for both of them, not to mention the amount of valuable assets and business ventures they have together. There’s no way Kris is going to go through with a divorce right now, despite the problems they are having. She’s determined to keep up the façade of a happy marriage at all costs. Showbiz and her career come way before any chance of divorce.”

“He really wants his kids to be happy. Well, the younger child/ren told him that they would be happiest if they could do what the older child/ren was doing. No surprise there. Given that their older sibling/s was receiving money, gifts, fame and parental attention for their behavior, why would they yearn for anything else? So, the father let them do it.

The father now realizes that he made a mistake. He is not dumb or passive. He knows that he screwed up. But he also recognizes the pitfalls of fame that lie before him. He knows that swift, public action – talking about the issues, speaking negatively about his wife, making public statements about how unhappy he is about the situation, or suddenly pulling the younger child/ren out of their activities – will only exacerbate the problem. The wife is ruthless when it comes to getting what she wants, and he has no doubt that she will launch a PR war against him if he makes a false move.

So he is trying to deal with all of this very quietly and behind closed doors. He has attorneys, and they are keeping up a steady but careful campaign for him to get more control over the situation. Just know that he is a lot smarter and more disciplined than anyone is giving him credit for being.

He wants a different upbringing for the younger child/ren, and he is determined to get it. Will he only get that by breaking up the family and divorcing his wife? Yes. And he wants that done soon so that he can influence the child/ren before they are of legal age to decide for themselves/selves.”

Geez, they make Kris out to be the husband in Sleeping with the Enemy! But let’s face it, he’s fighting a losing battle. Even if Bruce manages his divorce, he’s not going to drag Kendall and Kylie out of show business. They’re in it for the long haul now just like the older ones. He can throw them back into school and cut their engagements but that might cause more harm than good. I would hate to be around when that fight goes down. I’m super surprised in him. I thought Bruce would chill back and let everything happen around him but I guess you don’t win an Olympic medal without having some get up and go in there somewhere. It’s just been hibernating for the past 30 years.

Do you think the Bruce Jenner/Kris Jenner divorce will ever happen? Doesn’t Kris have enough money by now? How much more sucking can this teet take?