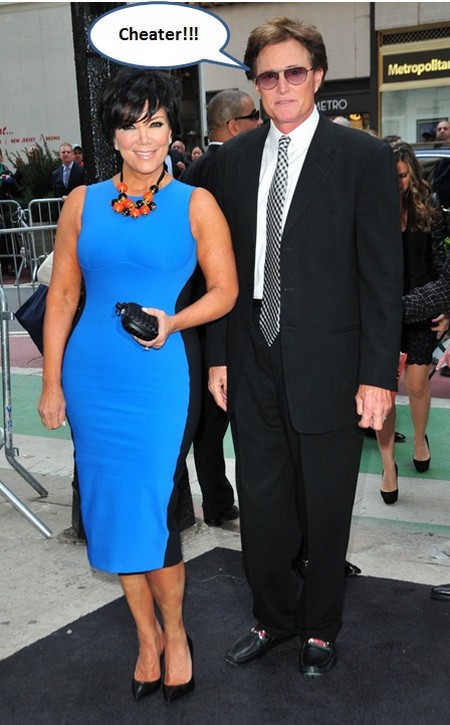 It looks like Kris Jenner better turn her attention away from her money making girls for a hot minute and focus on her marriage because it’s crumbling fast!  Her memoir was published earlier this year and in it she details the affair with Todd Waterman that ultimately ruined her marriage to Robert Kardashian.

I’m guessing current husband, Bruce Jenner, was furious that she felt the need to share details of her cheating with Joe Schmoe down the street, but now it’s worse.  A recent episode of Keeping Up With the Kardashians showed Kris bumping into Todd during a tennis lesson and them exchanging numbers after an extended hug. She swore up and down that was the end of their reconnecting but now sources tell the National Enquirer a different story.

“Kris told no one, but she did go out with Todd, and it was an electrifying date,” said an insider. “Kris walked out of the restaurant where they’d met looking like the cat that ate the canary. It’s so obvious that she still carries a torch for him.”

Bruce may not have known about his wives’ meeting with Waterman, but he did catch her signing an email to him with “xoxo” and that devastated the former Olympic Champ.  He’s a smart guy and the way things are starting to look Bruce believes, ‘Once a cheater, always a cheater.’ I don’t think he can believe that Kris has had the audacity to keep it up with Todd when their marriage is on the line,” explained the friend.  “Cheating is a deal breaker for him, so their marriage is teetering on the edge.  Bruce would feel totally betrayed if he actually knew the length and breadth of Kris and Todd‘s current relationship. They had continued to feverishly e-mail each other, flirt and text,” the insider divulged.  “I think Kris is covering up a lot of secrets and lies… Bruce’s feelings are still raw. I don’t think he can take much more, and will be wondering what else Kris is up to behind his back.”

If you have seen the episodes of Keeping Up With the Kardashians that have involved the Waterman mess, you know it is really a flashpoint for the entire family and while they were lashing out at Kris, she seemed to thrive on the drama and attention.  I can’t imagine that calm, easy going Bruce would want to be tangled in any of it.

Do you think there is more to this story than Kris has said?  Would she cheat on her second husband with the same guy that unraveled her first marriage?  Tell us your thoughts in the comments below!