Divorce ON as Kris Jenner Flaunts New Hot Date and Bruce Jenner Walks Out With Kylie and Kendall! (Photo) 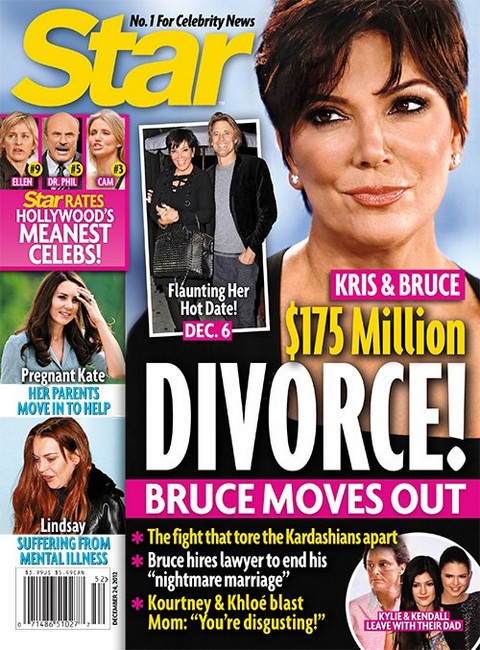 Finally, it’s finally happening!  Bruce Jenner has decided to pull the plug on his lousy marriage to Kris Jenner and not a moment too soon! Apparently a $175 million divorce battle is prettier than waking up next to Kris in the morning! If you’re even a casual fan of Keeping Up With the Kardashian’s then you have watched Bruce quite literally suffer in his marriage with Kris. I think we’ve all wondered why he doesn’t just walk away and of course the only obvious answer has been because of his two daughters with Kris, Kylie Jenner, 15 and Kendall Jenner, 17.  Now according to insiders there was a fight so explosive that Bruce stormed out and has hired a high-powered attorney to put an end to his “nightmare marriage.”  As Bruce alternated between anger and hurt, Kris was spotted out with a hot new date!

The latest issue of Star Magazine has all the inside scoop on how Bruce got tired of fighting with Kris over their daughters. He wants Kylie and Kendall to still get to enjoy their childhood while momager Kris thinks that they should be parading half naked in front of any camera that will snap them. Apparently he couldn’t watch them be objectified any more so he left the Calabasas home that the family has shared.  Even Kourtney and Khloe Kardashian are taking their step father’s side, not that it comes as much of a surprise. They blast Kris saying “You’re Disgusting!” We’ve seen numerous occasions onscreen where the girls have lashed out at Kris for the way that she treats Bruce. Even they know that he’s better off alone than with a woman that didn’t notice for 3 days that he had left once before!

Speaking of crazy, Star also seems to have it on good authority that Lindsay Lohan is suffering some sort of mental illness.  Didn’t we all already figure as much?  I’m not sure I needed them to tell me but I’m guessing the inside details and confirmation of it should be pretty interesting! Also in the new issue we are even more convinced that Kate Middleton is the most normal royal we’ll ever be introduced to. Her severe morning sickness doesn’t seem to be going away just yet so her parents have decided to move in to help take care of their daughter while Prince William continues to work and perform his royal duties. Pick up a copy of the Star for all the details on this story and many more.