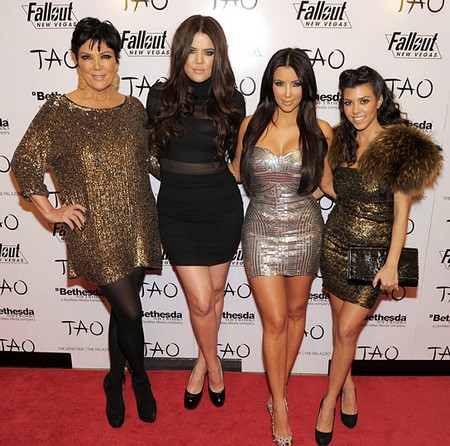 Kris was on the Today Show spinning her new Jedi Mind Trick about Kim’s decision to jump into her high profile romance with the perpetually foot in his mouth rapper so soon after her divorce to vocabulary-challenged, basketball ace, Kris Humphries.

“He’s been a family friend for a long time and he’s a really nice guy. When your kids are happy, you’re happy,” Kris said. “I think Kim is just hanging out with friends. There’s nothing crazy going on. They’re just having a really good time. My kids are really smart about timing and all that. So she knows what she’s doing.”

Again, why are celebrity mothers going on TV and talking about their kids? I guess Kris has more of a reason than Dina Lohan, but come on! My mom stopped defending me around the time I was old enough to talk, which was equally as much a blessing as it was a curse for the poor woman.

Although Kathy Lee Gifford is the godmother to Kendall and Kylie Jenner, she did try to convince the viewers of doing some actual reporting and jumped on Kris’s “smart” comment asking if Kim’s 72-day, quickie marriage to Humphries displayed her Mensa-like thought process.

Kris responded in typical mom-manager style. “First and foremost, she didn’t want to disappoint anybody. She feels horrible about what happened. She’s still going and struggling through that whole process. That will be finalized sooner or later. But her priority right now is work and she’s in London today launching a new fragrance. She just doesn’t stop. So she’s full speed ahead.”

Of course she doesn’t stop. Stopping might force her to think. Stopping might force her to look within herself and ask some important questions. But I don’t blame Kris for defending her kids (and pimping the new fragrance in her last breath). They’re her children for crying out loud! Remember, Kris’s past isn’t the shiniest either. She recently admitted she had an affair while married to Robert Kardashian which led many to question daughter, Khloe’s paternity.

I do have a problem with 31-year-old women who hides behind their parents. I actually feel SLIGHTLY sorry for Kris in her current situation. You know, Kris had to address the media after Kim’s divorce plans leaked and she hid out “working” in Australia while the media went crazy? That’s lazy and that’s immature. But that’s Kim Kardashian. She’s got the behavior only a mother could love.