Kristen Stewart Admits She Can’t Control Herself In Public! 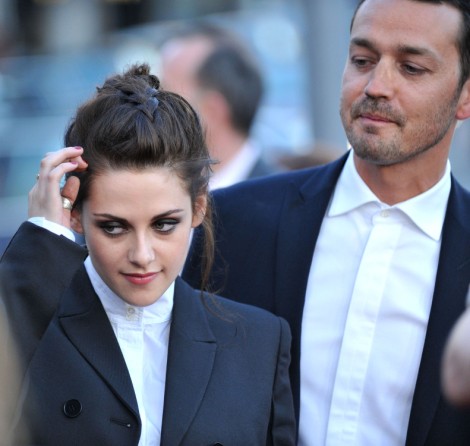 See? This is what I was talking about yesterday. Quotes are getting released to drum up anticipation for Kristen Stewart’s interview/cover with Vogue UK and everything she said is getting super analyzed by the world. Basically Kristen must have her relationship with Robert Pattinson on the brain at all times! Here’s her latest in a never-ending series of PR nightmare quips.

She told Vogue: “I know that if you haven’t thought about how you want to present a very packaged idea of yourself then it can seem like you lack ambition. But, dude, honestly? I can’t. People expect it to be easy because there you are, out there, doing the thing that you want and making lots of money out of it. But, you know, I’m not that smooth. I can get clumsy around certain people. Like if I were to sit down and think, ‘OK, I’m really famous, how am I going to conduct myself in public? I wouldn’t know who that person would be! It would be a lot easier if I could, but I can’t.”

So Kristen cheated on Rob in the back of a car for all to see because she couldn’t help herself! She’s inept! Most likely she was probably trying to convey the fact that she can barely walk from one side of the room to the other without tripping or dropping something. You can tell she over thinks things and that probably has a lot more to do with nerves than she’s willing to admit.

She goes on to say, “There is always going to be that seam of people who want things differently to the standardised version. It’s not necessarily a rebellious thing, it’s just who they are. That world back then, it just seems freer to me than anything I could ever touch and I’m fully nostalgic for it, even though I wasn’t even alive then. It’s the loyalty aspect of it all. I love being on the periphery with a group of people who have the same values that I do. People who don’t get off on fame, who just like the process of making movies and thrive.”

This reminds me of Midnight in Paris. Have you seen it? I’m in love with it. Woody Allen portrays such a common thought beautifully. We always look to the past as having been better, more exciting, liberating, etc., but if you were transported there you would feel the same way because the present sucks in every time period because it’s real. Anyway, see it!

I’m surprised there hasn’t been more backlash over the “values” comment. Kristen Stewart is like Shia LaBeouf to me. She’s always so good for a quote, so unfiltered. I doubt we’ll be seeing many more interviews like this in the future though now that she knows how they can bite her in the ass. Do you agree or think Kristen will always be Kristen?