Kristen Stewart and Robert Pattinson Photographed Together, Begging For Attention 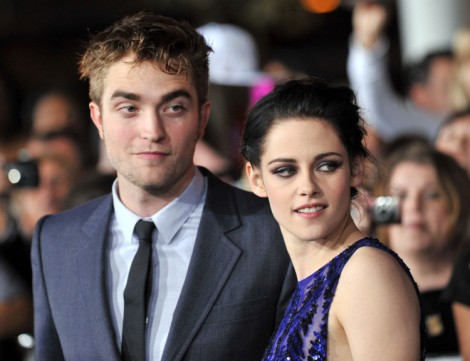 The Robert Pattinson and Kristen Stewart sightings continue! Apparently they were just spotted partying at a friend’s birthday party at the Chateau Marmont and just last night grabbed drinks at Ye Rustic Inn in Los Feliz. Only this time was special. There’s a picture! It’s confirmed! Robsten be praised!

Smells like reconciliation, right? Or is it more like a set-up? Whatever it is, it doesn’t look all the joyous. The couple appears to be on the moody side and Kristen’s throwing some major shade towards the photog. I can’t blame her on that one but a smile would have been a nice sign that the two are actually back together and not just posing for the cameras.

Because you kind of get that feeling, right? TMZ points out that Kristen and Rob are one month away from promoting the final Twilight movie. Are they coming out to drum up suspense for their red carpet walk together or have they grown tired of hiding their reconciled love from fans? By the size of the crowd at the bar, TMZ smells a set-up. “There was enough of a crowd to ensure someone was going to notice,” TMZ wrote. It would explain the sour mugs and the timing. But would Rob and Kristen play us like that? Oh sure! The tension of are they or aren’t they is good for business and the studios know that. The promotions for the first two films were based on it!

And the increased sightings might also be damage control for Rob’s recent partying in NYC. He was just spotted chatting up and getting cozy with Savannah Miller a couple weeks ago leading some to believe Rob and Kristen were just pretending to be back together for the studio. Was he going rogue on the game plan? Did Summit have to ship him back to LA and force him to hang with the trampire that broke his heart because he was ruining the reconciliation story? The naysayers were getting pretty loud and wild. If Kristen and Rob were back together like they said then why haven’t there been any pics of them? Well, their questions were answered last night.

So are you a believer? If this super private couple managed to stay invisible this long why would they choose to come out now if not for the publicity? What do you make of the Kristen Stewart and Robert Pattinson photographed together conspiracies? It doesn’t necessarily mean they are back together, right? Could it mean just the opposite?