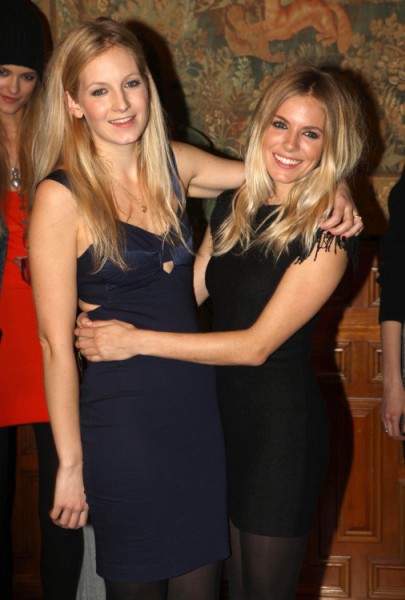 Robert Pattinson’s mystery girl has finally been identified and it appears he’s getting a little help from his friends. The mystery blond is almost positively Sienna Miller’s sister Savannah Miller.

Rob and Savannah got pretty close on their night out at the Electric Room bar in NYC last week while Kristen Stewart was on a date with her dad. Take a look at the video. Are you getting just friend vibes from the two? They’ve been friends for awhile. Rob is super close with Sienna because she’s Tom Sturridge’s baby mama and fiance so it’s probably no big deal for him to chat the night away with Savannah. But it might turn into a big deal if Rob isn’t really back together with Kristen. Is this evidence that Rob’s just playing along with Summit and going with the flow until promotions for Breaking Dawn – Part 2 are over? Does this mean Rob and Kristen aren’t really back together? Say it ain’t so!

This is just one awkward incestuous mess. Let’s say Rob is rebounding with Savannah. How is Kristen supposed to act the next time she sees Tom? She still has to promote On the Road with him later this year. How’s that going to be knowing Rob’s hooking up with Tom’s sorta sister-in-law? And how is that going to be knowing that Tom and Sienna probably sanctioned if not encouraged the match?

Am I looking too far ahead? Rob and Savannah were just talking at a club. They were probably so close together because the music was too loud, right? Kristen and Rob’s relationship could be perfectly safe, right? But still… there are no pics of Rob and Kristen. Why are they staying apart? Rob’s supposedly with her in LA right now but who knows for sure. Should you be nervous Twihards? I would be. Breaking Dawn promotions start soon so we’ll be able to judge their bodies as they walk the red carpet together. And, yes, by the way I know how pathetic that sentence sounded. But don’t pretend you won’t be doing the same! This is life or death news for the world and Savannah Miller. Robert Pattinson might have moved on from Kristen with her! She will have no place to hide from the Twihard wrath. Emilie de Ravin knows what I’m talking about. Be afraid Savannah. Be very afraid.

Did you check out the video? Do you think there’s any funny business going on there or are Rob and Savannah just friends?