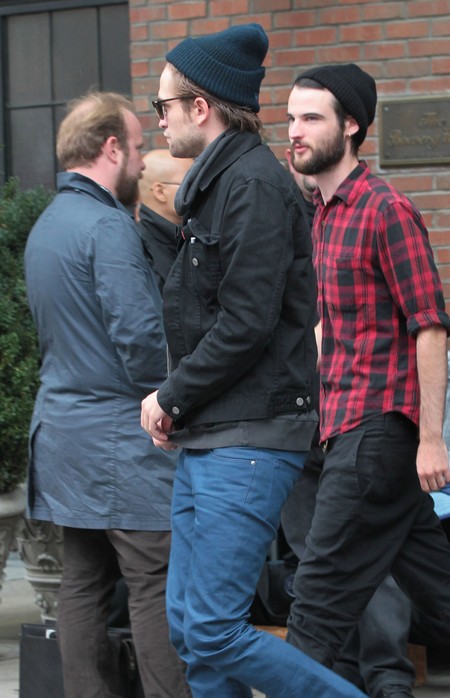 Does Rob Pattinson know that he supposedly has not only reconciled with home wrecker Kristen Stewart, but that he is rumored to have allowed her to move back in to his Los Feliz home?  Has he not read those recent magazine articles stating that his favorite trampire wants not only an engagement, but to elope this winter?  I guess he has no idea of his supposed relationship status because this past Saturday night the reluctant Hollywood hottie was spotted out with a pretty decent looking blonde.

Okay, actually he had his hands on her and she was pretty hot. She may have even cracked a smile or three, unlike his sour puss ex girlfriend! The duo was seen enjoying each others’ company at the Electric Room bar in NYC while Kristen spent a lonely weekend back in LA.

Here’s what I’m wondering. Have Rob and Kristen kind of gotten back together but he has now decided to give her a taste of her own medicine?  Revenge would be pretty sweet and after seeing Kristen plastered all over the place with married lover, Rupert Sanders must have stung, so is Rob returning the favor? I mean he would have to assume photos and video of him with ANY other woman would pop up online pretty quickly, right?  He knows that he is under a pretty big microscope so was this night out a very calculated move on the part of Rob?

Do you think we should take this as a pretty big hint that he has or is about to kick old sour puss to the curb once and for all?  Did Kristen really think that she had her man back, until she saw him with blondie? Tell us your thoughts in the comments below!