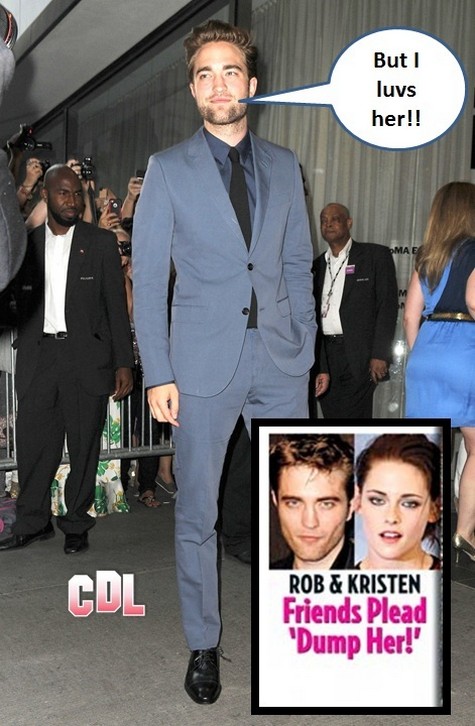 I’m sure we can all let out a large breath now that Robert Pattinson’s publicity tour for Cosmopolis is drawing to a close. He got through the interviews without a tear in sight. He looked healthy and relatively confident and laughed a lot. Kristen Stewart’s scandal seemed like it wasn’t even a blip on his radar. But his friends aren’t so sure. This week’s Us magazine covers the story that insists Rob’s friends are pleading with the Twilight star not to take his Trampire back. I was a firm believer that he was definitely going to but I’m not so sure anymore. He looks so steady lately and he’s been out with friends at night reportedly having a great time. I know that’s just a facade and what he wants us (and her) to think but it’s working!

It’s probably working on Kristen too. There are rumors circulating that she’s been doing everything in her power to get Rob to meet her. She knows she can reclaim some of that power if she can get him face-to-face but his friends aren’t having it. Good for them! They’re looking out for their buddy. You can’t fault that! I wonder what they’re telling him though. Do they basically refer to her as a slut 24/7 so he doesn’t forget (like he could)? That would be my tactic.

On the flip side, Us magazine’s cover story is of a happier nature. Jennifer Aniston’s engaged! The magazine gives us the inside scoop on Justin Theroux’s proposal and how Jennifer cried tears of joy! At least I hope they were tears of joy. It also has the down low on the ring and, oddly enough, why she said yes. I am interested in what the ring looks like but I’m assuming she said yes because she loves him. Is that too much of a jump?

But Jennifer lost some of her thunder because right beneath her radiant smile is the minor headline: “Brad and Angelina’s wedding is just weeks away”.  That poor girl. She can’t even celebrate her engagement without Angelina Jolie stealing some of the spotlight. I wonder if Brad Pitt and Jennifer’s publicists knew what was up and negotiated something between them. Brad and Angie are supposed to be getting married any day now. You better believe Jen and Justin’s people didn’t want to drop their news around that big event. It’s too coincidental and gives people like me unnecessary reason to talk. Do you think there was some scheduling going on? For instance, Justin popped the question last Friday, why did they wait ’til Sunday to announce? Is it because Angelina and Brad were thought to be getting married in France that weekend? I don’t know. I just don’t know.

I’m anxious to hear what Us magazine has to say about the coincidence though. I’ll be shuffling through this edition while I’m on a plane this weekend for sure!