Kristen Stewart and Robert Pattinson Together At The Chateau Marmont: Eyewitness Report 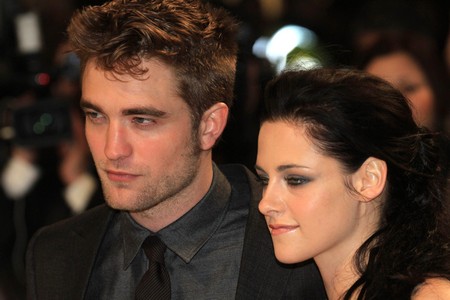 Kristen Stewart and her bitch, Robert Pattinson, were once again spotted together at the famed Chateau Marmont and not too long ago. In what can only be described as an Animal Planet documentary, Pattinson and Stewart arrived together for the birthday party of a friend, and according to an eyewitness, “they snuck into the garden from a private side entrance”. (A side note: Jennifer Aniston and Justin “Chiseled Head” Theroux were also spotted having a romantic dinner at the same Stewart/Pattinson spotting.) The faux-couple engaged in “intimate whispers” and clung to one another like sweaty kids.

In July, the fake Stewart had sex with Rupert Sanders and broke Patty’s fragile little heart. She was berated for her illogical and immoral actions; while Pattinson continued living his life like nothing had happened. The cheating scandal was one of the most widely reported entertainment news stories in recent years and Stewart was called out for being the biggest bitch this side of Barbra Streisand.

However, the plagued couple reconciled and the Stewart/Pattinson spotting phenomenon was born, much like bird spotting, or animal testing. Allegedly, it works on a Twitter honour system – you spot the Patty and the wife and you win a “Happy” badge! No, not really, we’re yanking your chain, just like Summit Entertainment is yanking our chain with this ludicrous tale of love.

A friend of the couple revealed, “They’re afraid of backlash, so they’re keeping things on the down-low.” What backlash? Why would they experience a backlash? We’re all for happy couples and balloons and unicorns, so what are you so scared of Patty and Stewy? According to a report on Hollywood Hiccups, “If their romance is supposed to parallel their Twilight characters, I’d say this is a twisted version of New Moon, after Robert (ahem, Edward) unveils his weird looking nipple, tries to commit vampire suicide, and then they’re suddenly back together. “

We agree Hollywood Hiccups. We agree.

What do you think? Let us know in the comments below!