Robert Pattinson and Kristen Stewart Are Not In Love – Twilight Contractual Obligations Forced Them To Reconcile! 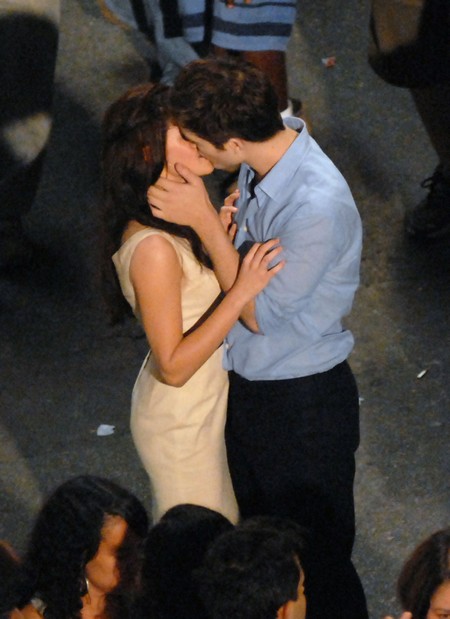 If you have been devoid of any life for the past few years, you might not know that Kristen Stewart and Robert Pattinson star in a little film franchise called Twilight. These films have been more over-hyped than Smell-O-Vision cartridges in the 70’s, but millions of people have succumbed to Twilight fever – the symptoms include drooling, lycanthropy and glitter bombed skin. These two lifeless creatures were dating for a few years, until Stewart cheated on Pattinson one fine morning with a sleaze named Rupert Sanders.

All hell broke loose and the universe came to a standstill. The four horsemen of the Apocalypse arrived at Stewart’s doorstep, rang the doorbell and ran away. It was one of the most career-ending moments in the history of Hollywood. Thousands of entertainment writers were stuck to their chairs and reported on the scandal for weeks on end, until conflicting reports resurfaced a couple of weeks ago that Stewart and Pattinson were back together again. Fans were astonished at the quick reconciliation and forums were filled up with, “Hey, weren’t angry people planning to eat Kristen a few weeks ago? What happened?” We know what happened. We always know what happened.

Twilight Breaking Dawn Part 2 will be released soon. A film of this magnitude requires steady PR, clever promotional events and a re-firing of talent/character chemistry. Producers of said film require the cast to be on their best behavior and sell the film to every journalist known to man. However, Pattinson and Stewart weren’t able to do such a heavy promotional tour with the negative vibes between them and as this could have resulted in theatrical tantrums at the promotional events, they had to reconcile.

Are they in love again? Is all forgiven? Are the two most famous actors in the movie industry back at writing poetry to one another on moon-lit evenings? Nope. There’s something called “contractual obligation”. This basically means that Stewart and Pattinson signed a contract for the PR and promotion of Twilight Breaking Dawn Part 2. If said contract were to be broken, careers would be destroyed and producers would be throwing themselves off bridges. There were no shallow epiphanies, no sparkly tears, no bursts of “omg-I-forgive-you”, and definitely no hugs. You have been duped.

Let us outline it for you more simplistically, shall we? Hypothetically, if Stewart or Pattinson were to be on non-speaking terms to one another at the promotional events, Breaking Dawn Part 2 might have suffered a severe box office hit from Stewart/Pattinson fandom. If Pattinson and Stewart were still broken up, the conversation would have been: “Joanie, we’re not going to Breaking Dawn Part 2 anymore because of K-Stewart! I am boycotting that bitch’s movie. She doesn’t deserve Robert! She deserves to be eaten by a Wendigo on Christmas Eve, so she won’t be able to open any presents!”

However, the complete opposite is true for reconciliation: “Joanie, we’re so going to Breaking Dawn Part 2! I want to see K-Stewart and R-Pattinson get together! She deserves Robert! She deserves to be eaten by a unicorn with a cupcake in its mouth!”

If you think Pattinson and Stewart are back together, you need to spill the Kool-Aid and drop the Jim Jones garb – it’s so last week. Do you think these two are really back together? Do you think it’s a contractual obligation? Let us know in the comments below how much you’re obsessed with Kristen Stewart – remember, “Without stalking you can’t be talking!”