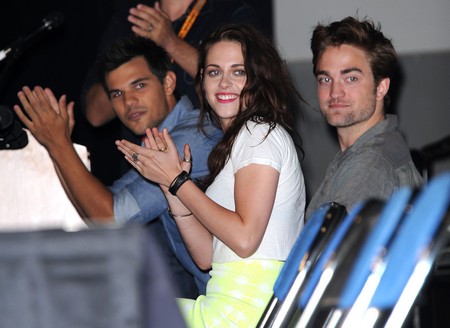 Robert Pattinson is the happiest man in Hollywood tonight. Far from being heartbroken and distressed after learning that his ‘girlfriend‘ of three years, Kristen Stewart, is a cheating home-wrecker, Rob is relieved. As everyone now knows, Kristen had a steamy sexual affair with Rupert Sanders, the director of Snow White and the Huntsman.   Rupert, a total douce, happens to have a lovely wife, Liberty Ross, with which he has two children.  As if the explicit photos were not proof enough of Kristen’s ‘infidelity’ and bad taste in men, her public apology to Rob, and Rupert’s to his family, pretty well silence any doubters.

So why is Robert Pattinson happy?  The answer is simple but most of you will need to prepare for a bit of a surprise – if not a total shock!  ROBERT PATTINSON AND KRISTEN STEWART ARE NOT A REAL COUPLE – THEY NEVER WERE – THEIRS IS A FAKE SHOWMANCE PUT TOGETHER BY SUMMIT TO PROMOTE THE TWILIGHT FRANCHISE.  Yes – it is true – and we have said it for over a year – but we are going to repeat the statement just so you Twihards can absorb it – Rob and Kristen were told to be act if they were in love, as if they were a real couple, to promote the multi-billion dollar Twilight franchise – and they did an amazing job for 3 years, raking in tens of millions for themselves as a consequence, and billions for the franchise.

Now that Kristen has messed up and the story is public, Rob is free!  He no longer needs to pretend to adore the obnoxious Kristen and waste his time pretending to be her boyfriend.  Besides, who would still be stupid enough to believe that Kristen loves Rob?  I mean give me a break – she was scheming and plotting with good old Rupert in order to find time alone with him – and the front seat of a car seemed to be the perfect setting for what looks in one pic like some oral sex.  This wasn’t some Christmas party that got out of control after too much punch type of fling.  This was a serious affair – and we suspect that it is not the only one Kristen has gotten up to.  As we write this, the media is going over every move Kristen has made for the past couple of years and you can bet they will find more dirt.

As we explained in an earlier article on Celeb Dirty Laundry, Kristen’s entire apology was clearly written by those trying to protect the Twilight Franchise.  We repeat Kristen’s apology here: “I’m deeply sorry for the hurt and embarrassment I’ve caused to those close to me and everyone this has affected. This momentary indiscretion has jeopardized the most important thing in my life, the person I love and respect the most, Rob. I love him, I love him, I’m so sorry.”

Don’t you just want to vomit when you read this embarrassment to real romance and real life?  If you love someone and you mess up badly, say by having an affair with your director, would you not at least show that loved one the respect of a private and personal apology?????  But this is not about love, not about Rob, and not about their supposed relationship – it’s about promoting Twilight Saga: Breaking Dawn Part II which is supposed to be released in a few months.  Don’t you dare think that Kristen is apologizing to Rob – she is not – she is apologizing to the Twihards in the hope that they will be able to crawl back into their delusional world and spend more money on the Twilight franchise.

But wait!  Poor Rob is not really free yet, is he?  Kristen’s absurd and transparently fake public apology to Rob means that the spinners and twisters who run her propaganda – yes Summit and her management – hope to salvage the ‘romance.’  Now Rob will be placed under tremendous pressure to forgive Kristen – let us hope and pray that he refuses to do so.  Be a human being Rob – refuse to play the game any longer.  But we doubt that he will act like a real person and tell Kristen to take a flying f***.  After all Rob has been playing this game for the past three years – what does he really care if Kristen had some fun with a married man?  He never loved her anyway…