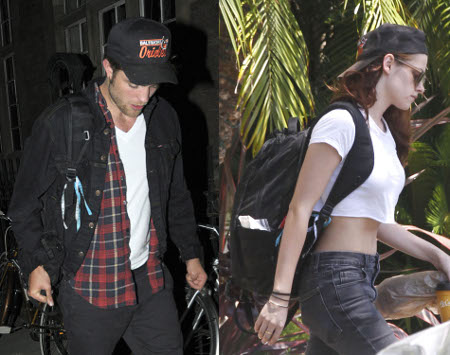 As we reported earlier, Kristen Stewart‘s mother filed for divorce, and Kristen’s life continues to, so it seems, explode in all sorts of unfortunate directions. The actress was the subject of a nasty cheating scandal after photos of her getting all smoochy-smoochy with Rupert Sanders surfaced online, and now she has to deal with all of this.

Many people are still utterly confused as to why Kristen would take such an unfortunate misstep with her relationship, but perhaps Kristen cheated on Rob as a reaction to her parents’ impending divorce? Was she just trying cope somehow? Was her emotional life spiraling so out of control that she just couldn’t help herself falling into the arms of Rupert Sanders?

Jules Stewart and John Stewart, Kristen’s parents, have been separated since 2010, but it wasn’t until August 17th of this year that Jules decided to take the final plunge and petition for a divorce. The tension between the two parents was, obviously, severe and it undoubtedly affected Kristen Stewart in more ways than one. It wouldn’t be a surprise to learn that all the family drama finally got to Kristen, ultimately forcing her to emotionally crack and react to her parents’ impending divorce in an irrational manner.

What do you think? Do you think Kristen cheated on Robert Pattinson because she didn’t have a clear head? It seems like a perfectly plausible explanation and perhaps Kristen could use her parents’ divorce as a sympathy card in a ploy to finally reconnect with Robert Pattinson! You gotta do what you gotta do, Kristen. Take the poll to cast your vote!