Kristen Stewart Enjoyed Baring Breasts In ‘On The Road’ 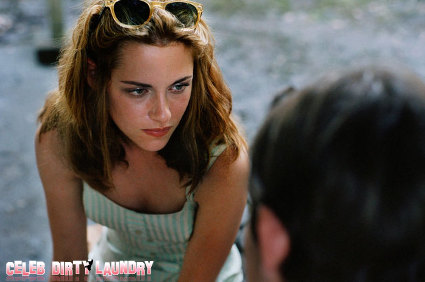 As awkward as Kristen Stewart may be — the girl definitely has some serious guts.  While the 22-year-old always comes across shy and nervous in public, she definitely is setting out to prove that she isn’t just the painfully sullen Bella Swan from the Twilight franchise.

While K-Stew has been busy promoting her upcoming film, Snow White and The Huntsman, she has another movie under her belt coming out soon – one that definitely allows audiences to see her far removed from her usual roles.  The movie, On The Road, has Kristen’s character Mary Lou barring some frontal nudity.  What?  Is this the Kristen we know?  You bet it is.  Of her decision to go topless in the film, Kristen didn’t hold back, admitting that she knew fans would have somewhat of an alarmed initial response regarding her artistic choice.

She recently told E! News that she expected fans to make a fuss over her semi-naked scene:

“I can’t say it’s not a little bit jarring, but it’s jarring in the right way. I wanted it to be. I’m really proud of it.”

Of fans reactions upon seeing the film at this months Cannes Film Festival:

I have to admit I’m surprised by her brazen-esque attitude.  Does this mean that Kristen is interested in the Fifty Shades of Grey franchise?  Maybe that’s a bit much . . . even for her.