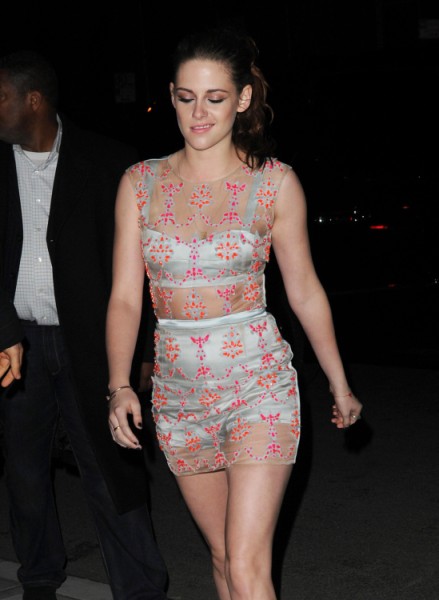 The title was supposed to be Kristen Stewart Fighting With Katy Perry Over Another Closet Homosexual Englishman but I didn’t have enough room AND I wasn’t sure if the twihards out there could laugh it off. Twihards and humor don’t usually go hand in hand. But Kristen Stewart and Katy Perry are apparently feuding and it has nothing to do with Robert Pattinson this time but Freddie Mercury.

For the last 30 years (not really but it feels like it) they’ve been trying to get this Freddie Mercury bio pic off the ground and it sounds like it’s FINALLY going to happen. Sacha Baron Cohen has signed on as lead which is just brilliant casting. We might has well just hand him the Oscar now because all he has to do is not be utterly terrible and he’ll win. But according to Star magazine, Kristen, Katy and Lady Gaga are all pulling each other’s hair out over the part of Mary Austin, a woman Freddie dated for six years before he admitted he preferred men.

“Lady Gaga, Katy Perry and Kristen Stewart are on the short list for Mary, who played a huge role in Freddie’s life,” the source told Star magazine. “They all desperately want the part, and it’s getting ugly. With the girls fighting like this, it’s just hurting their chances of getting the part. It’s unprofessional, and Sacha is tired of the back-and-forth — he wants to choose one of them and be done with it.”

First of all Sacha’s tired of the back and forth because this movie has been in pre-production for YEARS. For some reason it can never get legs so I’m sure most of his impatience has to do with the money and not the actresses. And am I the only person bored with the actresses feuding over roles stories? Are cat fights a prerequisite now? There are a lot of actresses out there and this is a hot part. Yes, women are going to push hard for it but that doesn’t mean they’re feuding. It means there’s just healthy competition. Apparently Kristen and Angelina Jolie hate Jennifer Lawrence for all her scurvy scene stealing. Blurg. It’s boring and a tad insulting.

What won’t be boring? This movie. I’m kinda obsessed with Freddie Mercury right now because there have been all these documentaries on him lately and I’ve tried to catch a few. I got interested during the Olympics when he was featured during one of the ceremonies (the closing?). His voice is AMAZING and his life was tragic. Was I the only person to not know he put out on opera album? Crazy! Anyway, I have no doubt Sacha will play the hell out of this role so I’m stoked for the whole thing. Hopefully the girls can stop scratching each other’s eyes out long enough to fit the part. So… freakin’… stupid.