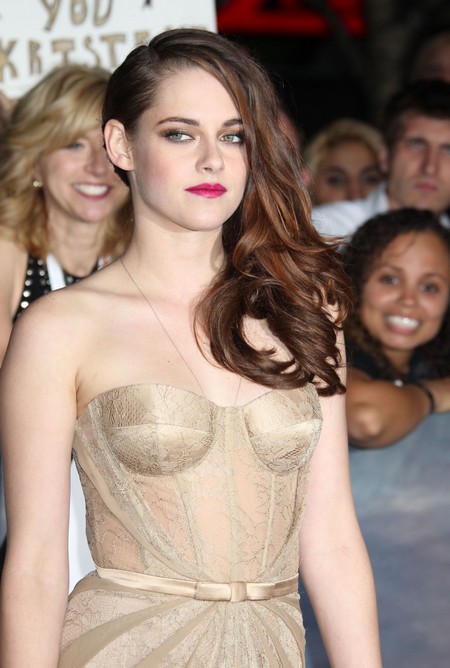 This may be the only good thing I ever say about Kristen Stewart: She isn’t a bitch to animals. When thousands of fans turned out to watch the stars of Twilight: Breaking Dawn Part 2 walk the red carpet for the premiere, no one was more shocked than the cast to see a cage housing three wolves in the middle of the chaos. Apparently someone organizing the event thought the evening would be made perfect if the audience got a first hand glimpse of what a wolf pack looks like—since the final movie showcases the ultimate showdown between good vampires, bad vampires, and shape shifting wolves.

Robert Pattinson is an animal advocate and adopted a puppy from a 5-day kill shelter in Louisiana. Despite the glamorous bubble he lives and works in, he understands how important it is to let wild animals alone. PETA (People for the Ethical Treatment of Animals) issued a statement about the event: “Didn’t it dawn on the Twilight event organizers that real wolves do not belong at a party with blaring music and flashing lights? The wolves were provided by Hollywood Animals, a notorious exhibitor that has been cited for numerous violations of the Animal Welfare Act for repeatedly failing to provide the animals it exploits with basic veterinary care and proper shelter, space, food, and water,” PETA continues. “We hope the rest of the promotional events surrounding Breaking Dawn celebrates the brilliant work of the cast and crew and shows enough respect for wildlife to leave animals out of it.”

The stars have been silent about the shock, but we know from their past behavior and affiliations that this was a surprise for all. In fact, Christian Serratos, who plays Bella’s friend Angela Webber in the Twilight series, has done two campaigns for PETA, including “I’d Rather Go Naked Than Wear Fur”, “Save the Seals,” and the just released “Respect Life: Go Vegetarian” advert. Kellan Lutz, who plays Emmet, posed for a pro-adoption ad for the group, and his on-screen wife Rosalie, played by Nikki Reed, recently celebrated her birthday with a full on vegan menu.

Obviously the cast is eager to be compassionate towards animals, and understands that a loud party with screaming fans is the last place for wolves—caged or not! Of course whenever celebs do anything charitable publically it has to be viewed with skepticism. What do you think of the bizarre publicity scheme? Relevant to the movie or a cruel and unnecessary act?