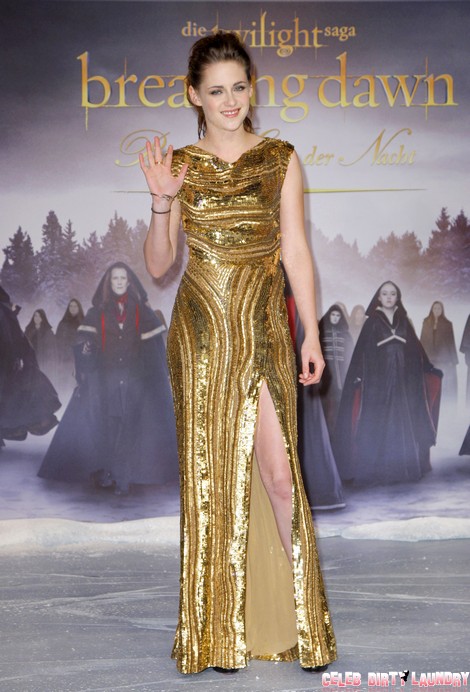 Kristen Stewart’s life seems to be going pretty well right now, at least on paper.  My personal favorite misery princess has somehow managed to worn her way back into the heart of longtime beau, Robert Pattinson after being caught on camera messing around with ex-boss, Rupert Sanders last summer.  She has also been making the media rounds promoting Breaking Dawn Part Two, the final installment of the Twilight franchise that has brought her fame in the first place.  Twihards’ have been able to watch their favorite couple in the world reunite both on and off screen so while Kristen has moped, her popularity has sky rocketed.

One question that I think everyone has had has been about Kristen’s career after Twilight. The scandal that spun out of her banging the married Sanders seemed at first to have a seriously negative affect on her Hollywood standing. It was also initially rumored that she was dropped from the sequel to Snow White and the Huntsman.  Our sources are now saying that simply is not at all the case. Rupert Sanders is the one that will not be returning to direct the film. He was supposedly never attached to the sequel and at this point he wants no part in the making of it. He is still desperately trying to save his marriage to Liberty Ross and isn’t going to do anything to sabotage that. Kristen on the other hand IS still signed to do the sequel. The script is written and production is set to begin later next year, with Kristen on board.

This acting gig is great news for the star because aside from Snow White, Kristen has absolutely nothing else lined up. In fact all of her Twilight cast mates are signed to multiple projects over the next 18 months which means that although she is the Bella Swan, she as an actress is the least in demand!  Do you think Kristen’s turn in the sequel will lead to some better parts rolling back in or will she forever be affected in Hollywood by what she has insisted was simply a “momentary indiscretion”? Tell us your thoughts in the comments below!