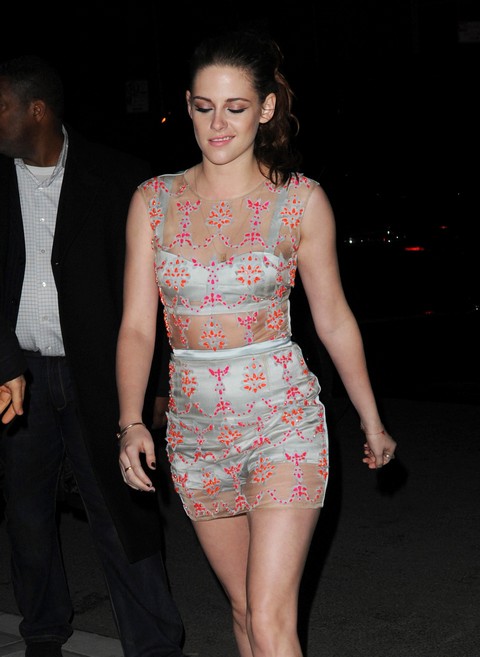 While Kristen Stewart dazzled at the premier of her latest film, On The Road in New York City on December 13, she was without her delicious arm candy – aka my boyfriend – Robert Pattinson.

Where you be Robbie?  Amidst rumors of an impending engagement, all seems well between the two – so why was Kristen flying solo?  It seems that although Rob wasn’t by her side, he wasn’t far from her thoughts.

After the movie’s screening, Kristen attended the after party with her co-stars, Garrett Hedlund, Sam Riley and Kirsten Dunst at the Boom Boom Boom in the Standard Hotel – and according to eye witnesses she was on her phone texting all evening.

Dressed in a more casual attire of jeans, boots, a hoodie, and leather jacket, Kristen seemed to keep to herself (big surprise there little Ms. Awkward) stealing herself away for the odd cigarette with her fingers banging away on her phone.  Missing your fella are you Kris?

According to HollywoodLife, Kristen initially “begged” Rob to come to NYC with her to attend the premier, but he decided to remain in LA.  With Kristen’s tendency to be completely socially awkward, I can’t say I blame her for wanting Rob’s support.

Even though Rob wasn’t with her, she managed to enjoy herself, sipping on vodka cranberry cocktails, sharing in jokes with the boys.

“Sam was sitting with Kristen for about an hour”, says our source. “They ate burgers and were chatting really intimately and seemed to be having a lot of fun. Garrett joined them for 20 minutes and the three of them had a catch up – there was a lot of giggling!”

Careful Kristen, you don’t want to make Rob jealous!  We’ve all been privy to the backlash that occurs when you even just think about another guy!