Kristen Stewart Vs. Kirsten Dunst At On The Road Screening – Who Looked Better? 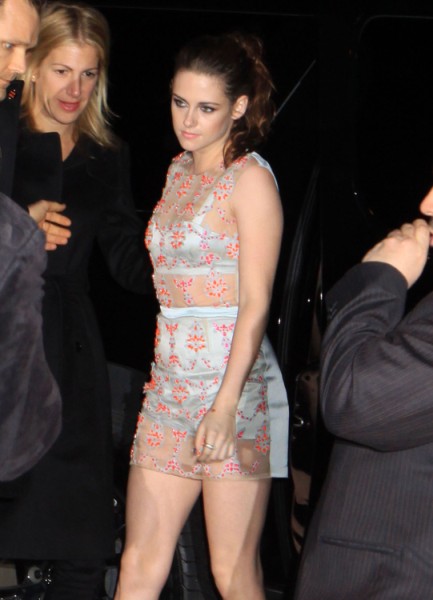 I get fashion as art and I get that it’s one of the easiest ways for people to express themselves but I have no idea what Kristen Stewart was trying to express at last night’s screening of On the Road. Doesn’t it feel like there’s been a screening for this movie every other weekend for the past several months? Under normal circumstances I would say they’re getting rather old but not when Kristen dresses up in a two piece 50’s style bathing suit (which Taylor Swift is probably buying right this second) with a sheer overlay. So let’s talk.

I don’t want to hate the dress. I really don’t! At certain angles, if I squint my eyes just right, I actually think I moderately tolerate it. The problem is the fit. Kristen, who is as tiny as they come, looks squeezed into the ensemble and all it’s doing is reminding me of Kim Kardashian. You remember that nasty black, tight peplum outfit Kim wore a couple days ago that forced some major belly rolls? That’s all I can think about when I see this look. So this is a miss for me. The second I start comparing Kristen’s premiere outfit to something Kim probably wore to the grocery store we have problems.

So let’s move on to co-star Kirsten Dunst. Thank you Kirsten. Thank you for making quality movies again. Thank you for wearing the perfect shade of lipstick and thank you for making Kristen look super awkward on the red carpet. There are a few photos of them posing together and the look on Kristen’s face is all “Why the hell didn’t I wear that instead?!” So I love it. Kirsten manages to look pretty amazing while keeping to her boho/fanciful styling roots. But who am I kidding? I’ve loved Kirsten Dunst ever since Interview with the Vampire. She can do no wrong!

Kristen Stewart vs. Kirsten Dunst – Who did it better at the On the Road screening? Kristen’s role in the film is pretty risky and adventurous. Was she trying to make that point in her Erdem disaster? Did it work? Or is she just really into exhibitionism lately? Side note: Kate Middleton loves Erdem. Will we see her in this anytime soon?