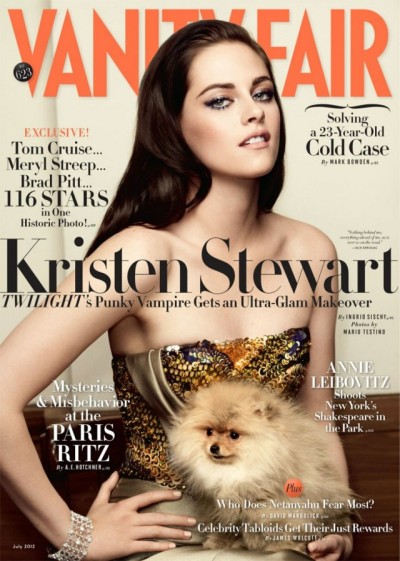 Kristen Stewart lovingly describes herself as a “weirdo” who smokes pot in her new interview with Vanity Fair magazine. The July cover girl looks amazing with dramatic, Elizabeth Taylor eyelashes and a soft glow that contrasts sharply to the hard words the actress has to say about the “voracious, starving shit eaters who want to turn truth into shit.” I guess I’m probably in that category somewhere… haha!

With her colorful vocabulary acting as her ever faithful shield, Kristen goes off about the whipping boy media, her sourpuss expressions and her delight in looking like shit sometimes on the red carpet. She also touches on the life-changing photos that surfaced a few years ago of her smoking a bowl while sitting out on her stoop in her pajamas. I’ve included some snippets below:

“I have been criticized a lot for not looking perfect in every photograph,” Kristen Stewart tells Vanity Fair contributing editor Ingrid Sischy in July’s cover story. “I get some serious shit about it. I’m not embarrassed about it. I’m proud of it. If I took perfect pictures all the time, the people standing in the room with me, or on the carpet, would think, What an actress! What a faker! That thought embarrasses me so much that I look like shit in half my photos, and I don’t give a fuck. What matters to me is that the people in the room leave and say, ‘She was cool. She had a good time. She was honest.’ I don’t care about the voracious, starving shit eaters who want to turn truth into shit. Not that you can say that in Vanity Fair!”

On top of battling personal reluctance, Stewart also struggles with the public’s preconceived notions about her personality. “People have decided how they are going to perceive her,” Robert Pattinson tells V.F. of Stewart. “No matter how many times she smiles, they’ll put in the one picture where she’s not smiling.”

Of her life as a major star, she reflects on the moment when she realized that Twilight had changed her life. “You can Google my name and one of the first things that comes up is images of me sitting on my front porch smoking a pipe with my ex-boyfriend and my dog. It was [taken] the day the movie came out. I was no one. I was a kid. I had just turned 18. In [the tabloids] the next day it was like I was a delinquent slimy idiot, whereas I’m kind of a weirdo, creative Valley Girl who smokes pot. Big deal. But that changed my daily life instantly. I didn’t go out in my underwear anymore.”

Well at least she learned something from the pot incident! Stop going outside in your underwear! Are you as surprised as I was that she labeled herself a “Valley Girl”? I’d never use those words to describe her so it’s always interesting to hear how others perceive themselves. I actually really like this interview. Is Kristen a little pretentious? I think so. But she’s 22 and people ask her things and have to listen so I give her a pass on thinking what she has to say is important. She’s pretty self-aware and down to earth and those are admirable traits in Hollywood.

Do you like what Kristen had to say or do you think she comes off a little rough around the edges?