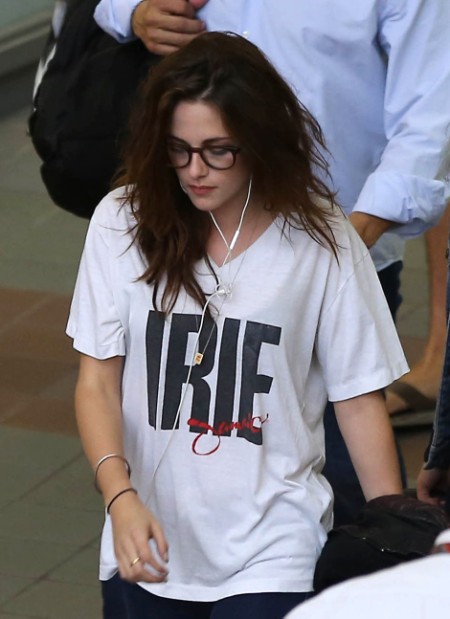 Kristen Stewart’s at it again! She was spotted landing in Toronto last night wearing another of Robert Pattinson’s shirts as well as the gold ring he gave her. Either the hygienically-challenged (reportedly), scandalized actress has no clothes of her own or she’s trying to tell us something….

This is only the third time Kristen’s braved the paparazzi since holding tight and making drowsy with Rupert Sanders but it’s the second time she’s bathed herself in Rob’s hand-me-downs. A week ago she was caught clutching his backpack and ring and seen sporting one of his hats. It could just be she likes to be reminded of him. It could just be she wants to smell him every second of every day since she knows he’s not coming back. But that’s not fun at all! Kristen might make dumb ass decisions but she’s still smarter than the average bear – and a young heartbroken chick. Oh so clever and oh so sly Kristen is not above using the media to send Rob the message that she’s still not done with their relationship.

But the plot thickens. The UK’s Mirror defined “Irie“, as “the way you feel when you have no worries – to be at total peace with your current state of being.” Too good, right?

So what do you make of Kristen’s wardrobe choice? Again, she knew she would get papped and we can all agree she’s super sensitized to the media at the moment. She has too psychotic of fans to think the shirt would go unnoticed. Is it a sweet gesture or kind of pathetic? Is this her way of telling the world she’s over the drama? I can’t help but feel bad for her. As I shuffled  through the photos I was struck at how young she looked. She’s like a little bird! I hope she can keep it together this week. We can say what we want (and we will) but it takes a lot of courage to do what she’s doing. To go out and be cordial and look in the eyes of the people who’ve raked you over the coals over the last month is difficult, to say the least. Maybe she’s wearing Rob’s shirt in lieu of some liquid courage? I would have just gone for the liquid courage.

Check out the photos. Kristen Stewart actually doesn’t look so bad – not at death’s door like the tabs have been insisting. Oh, and some of my loyal readers have blasted me for not considering that Kristen’s wearing Rob’s clothes and ring because they never broke up and they’re just staying apart until the media scrutiny dies down. That’s sweet. I used to believe in Santa Clause too.