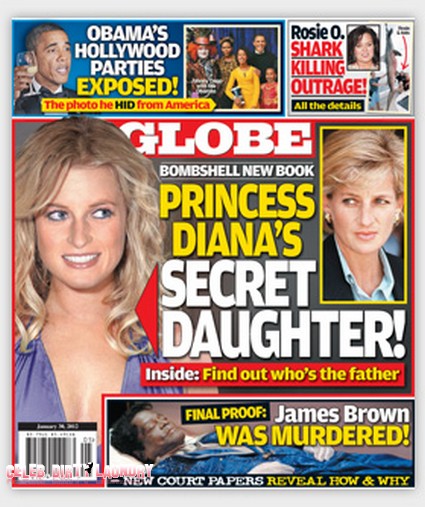 The current issue of Globe Magazine features the cover story ‘Princess Diana’s Secret Daughter.’  The magazine claims that there is a bombshell new book coming out that claims Prince William and Prince Harry’s mother Lady Diana had a secret daughter.  I guess that means they have a secret sister.  Inside the magazine they claim they can reveal gasp….who the father is.

Globe has the scoop on the details: Princess Diana had a secret daughter! That’s the explosive claim of a new book and also of rumors the palace has battled to keep under wraps for decades. Find out amazing details about the young woman’s bizarre birth and why she’s living in hiding. Plus GLOBE has a shocking photo of what she would look like today!

On the cover of the magazine they have a young women who bears a startling resemblance to Lady Diana – I guess we re suppose to assume that is her daughter.  It looks like they took a picture of Lady Diana and Photoshopped long hair on her.  What do you think is there a secret Lady Diana daughter hiding out somewhere?

Also featured in this week’s Globe they claim pop legend James Brown was murdered,  and they have the bombshell court documents,  who has leveled the shocking charge, how and why they believe the Godfather of Soul was killed.

To find out all this and more pick up the current issue of Globe Magazine!