Lady Gaga Versus Justin Bieber Vomit Contest – Who Won This Round? (Video) 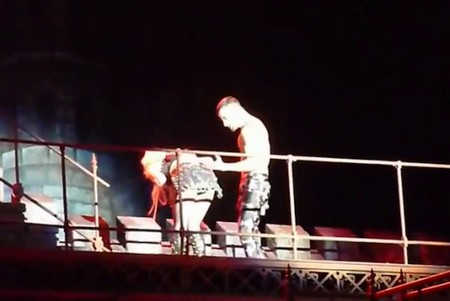 So, who won this round in the battle of the barfers?  It seems Lady Gaga took out Justin Bieber this time.  During Gaga’s concert in Spain over the weekend the pop star got sick in the middle of her hit song “Edge of Glory”.  With her back to the audience she bends over and proceeds to throw up and continues with her routine.  She then bends over again (and it looks like it’s part of the dance) when she throws up a second time.  She seems to recover when bending over once more she throws up a third time and continues to dance never missing a beat putting Justin Bieber’s vomiting performance to shame.  PRO-FESSIONAL!   Gaga later tweeted  “Was praying nobody saw but actually its quite a good laugh if u need one!” and then posted a link to the clip.  Well Gaga, everyone saw as TMZ was so kind to post your link.

I’m just wondering, is this going to be a trend for performers?  I’ve got a limit of how many videos I can watch of celebrities getting sick on stage and Gaga was the last draw.  I understand they want to be there for their fans and not let them down and I’ve got to hand it to Gaga because girlfriend definitely did it with as much grace as possible, but come on.  No one wants to see that extra helping of juiciness at a concert.

Gaga,  I truly hope you feel better and have no doubt that you can redeem yourself, but the next time you feel the urge to barf DO NOT GET ON STAGE!  Yes, we, your fans, understand that even celebrities need sick days.  Use them…we won’t mind.