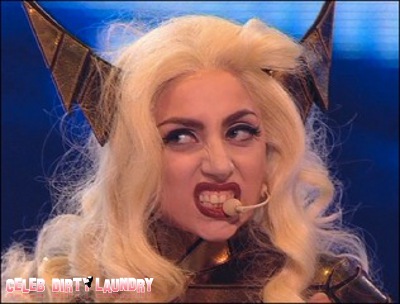 There is a bizarre story circulating around the internet today claiming that Lady Gaga thinks the Devil is haunting her dreams and is enlisting the help of 65-year-old spiritual guru Deepak Chopra to guide her through this.

The story, which has been traced to UK tabloid The Daily Star, says that the 25-year-old singer has asked Chopra—who famously treated fellow whack-ado Michael Jackson—for spiritual guidance in this matter. “I have this recurring dream where there’s a phantom in my home and he takes me into a room where there’s a blonde girl with ropes tied to her limbs pulling her apart. I told Deepak the dream was so terrifying I thought somehow that a devil force was trying to take hold of me,” Gaga is quoted as saying. “He laughed and told me that I should learn to embrace my own insanity. I told him, ‘The Devil is trying to take me, Deepak. I’m a good girl!’ He said not to worry.”

But that’s not all, apparently the “Marry The Night” singer—who often makes use of provocative religious imagery in her video’s and performances—has also expressed a desire to “go into a coma and levitate” and that Chopra is going to help her do this. Of her studies with the new age doctor, Gaga said, “Deepak is the most influential person in my life. His message is a true inspiration. He helps me to reach inside my spirituality and we take it to the next level.”

Neither Lady Gaga nor Chopra have commented on this “interview” on their websites or on social media, but I’m thinking this report is either fake, fodder for her upcoming “Born This Way Ball” World Tour, or Gaga really need’s to stop putting LSD in her Cheerios.
Anyway, just to be safe, Gaga’s Vampire Diaries boyfriend Taylor Kinney should probably think twice before spooning with her before she goes all “Paranormal Activity” on his ass.