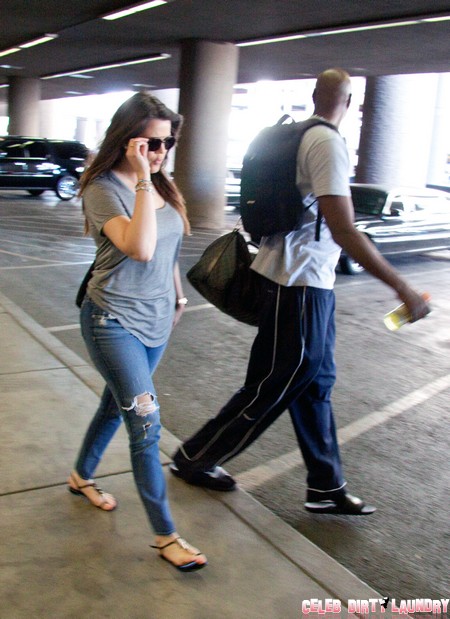 Uh-oh. It looks like by far the most stable of the Kardashian relationships has just landed in a major ditch.  Khloe Kardashian and loyal husband, Lamar Odom apparently had an absolute blow out a few days ago, it was bad enough to cause Lamar to flee their residence. I’m not talking about taking a drive or even spending the night away.

I have to wonder if this marriage meltdown had anything to do with the couple’s quest to have a baby. Unfortunately, Khloe’s failure to conceive has garnered more headlines than her weight battle and I’m sure it has taken a huge emotional toll on the couple.

Lamar hopped a flight to Vegas according to a source: “Lamar’s normally a easy going, chill cat so whatever he and Khloe got into it about clearly pissed that [boy] off where he had to scoot over to Vegas. I heard that Khloe tried to call him for two days, but he sent her straight to voicemail. He is trying to send her a message by just up and leaving her high and dry like that and not talking to her,”

Do you think that they’ll work things out or is the pressure of handling real problems while the cameras constantly roll becoming way too difficult?  Also, do you think pathetic momager, Kris Jenner will look at their marriage stress as just another way to grab ratings for the sinking, Keeping Up with the Kardashians? We already have seen proof that Kris has no moral compass when it comes to pimping out her daughters to the media.  Are Khloe and Lamar doomed? Tell us your thoughts in the comments below!