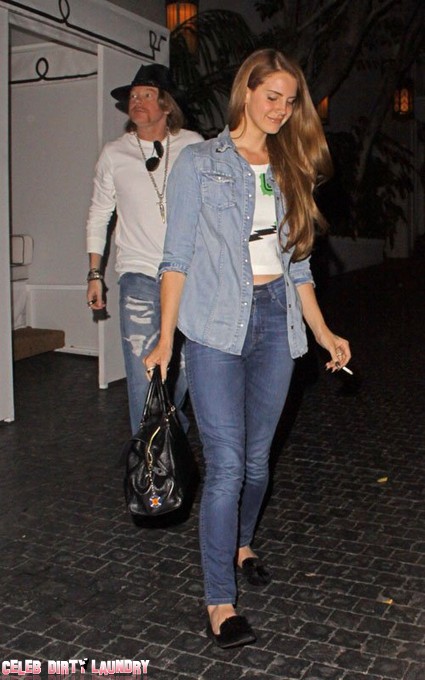 New couple alert! Lana Del Rey and Guns ‘n’ Roses frontman Axl Rose have been busted leaving a Hollywood hotel together. Does this mean the wild man of rock is dating a young singer half his age? The photographic evidence is there for all to see!

The pair were spotted leaving the famous Chateau Marmont in LA late on Friday night. The 25 year old singer had a smile on her face while Axl walked a couple of steps behind. They left in an SUV.  The pictures suggest a date night or possible hook up between this unlikely pair. Or are they such an odd couple? There seems to be a bit of history if you delve a little deeper…

We know Lana is a fan of the Gunners. She was seen at one of their gigs in Hollywood last month. She also recorded a song called ‘Axl Rose Husband‘ before she hit the big time. It included the lyrics ‘You’re my one king daddy. I’m your little queen’. So maybe Lana has been crushing on Axl for some time and he’s flattered by all the attention.

Axl is a little older than his gorgeous female friend. He’s 50! He had a very famous girlfriend in the early 90s – supermodel Stephanie Seymour. But his love life has been a little quiet in recent times. It’s nice to see he’s not wanting for female company. I wonder where else these two have been hanging out?