LeAnn Rimes Says She Was Not Drunk During “X Factor” Duet with Carly Rose Sonenclar! 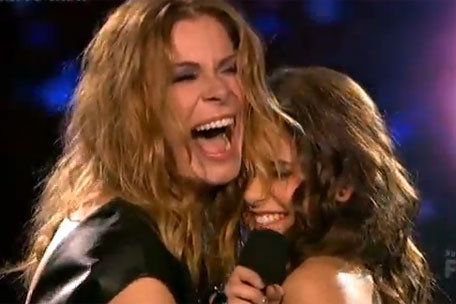 If you saw last night’s X Factor duet featuring the amazeballs Carly Rose Sonenclar and LeAnn Rimes, then you might’ve gotten the impression that something wasn’t quite right — on LeAnn’s end. The “How do I Live” singer came out on stage in a black dress, greasy hair, and some eyes that appeared less than sober. Many critics have lambasted her for her unusual performance and are claiming that she was drunk. In response to all this negative energy surrounding the performance, LeAnn Rimes says that she wasn’t impaired. Not even in the slightest. Actually, she says her behavior was a direct result of her “trying to help this 13-year-old girl who was having some trouble with the song.”

Yikes! I’m a little confused as to what 13-year-old girl LeAnn is referring to because, from what I could hear, Carly Rose wasn’t the one having trouble with the song. Britney Spears — and all the other judges for that matter — gave the performance relatively glowing views. Though, at this stage in the game, we don’t really expect negative commentary from the judges. But don’t you think they recognized LeAnn was a bit off her game?

Apparently, LeAnn thought Carly was having trouble with some of the notes and was trying her best to aid the young singer through the song. I don’t understand how acting awkward and sloppy can help someone through a song? Maybe it’s a musician thing. Who knows.

According to TMZ: LeAnn’s lawyer, Larry Stein, who spoke with LeAnn a [earlier today], tells TMZ “LeAnn was not performing the way she would normally perform, because she was on stage with a young girl.”

LeAnn is continuing to say that she was super sober and that she in no way compromised the duet by acting irresponsible beforehand. But mysteries continue to pop up. Allegedly, LeAnn was seen preparing a plate of food backstage only to have spilled it everywhere. We could related this to clumsiness, maybe even performance jitters. Or we could blame it on drunkness. That’s your call to make. LeAnn Rimes: Drunk X Factor performance or amazing performance? Let us know in the comments section below.