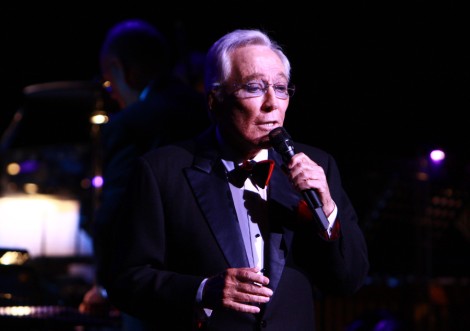 Legendary singer and TV host Andy Williams has passed away at the age of 84. According to TMZ, Andy Williams died at his home in Branson, Missouri. He is survived by his wife Debbie Williams and his three children Robert, Noelle and Christian with ex-wife French singer, Claudine Longet.

Over the past year Williams has battled bladder cancer. In July he left the hospital so he could spend the remainder of his days with his family at his home.

Williams is best known for his Oscar-winning rendition of Moon River which was featured in the film Breakfast at Tiffany’s. He also had hits like Love Story, Can’t Get Used to Losing You and Almost There. He recorded 18 gold and 5 platinum albums during his iconic career. In addition to his music, Williams began hosting The Andy Williams Show in 1962 and went on to win three Emmys. He also hosted the Grammys from 1971-1977.

The jack of all trades was also a smart business man. Williams opened the Moon River Theatre in Branson in 1992. At the time he said he got a lot of criticism for opening a non-country theater in a city known for country music but it continues to thrive to this day.

There’s this great quote from Williams that I think is appropriate right now. He famously stood by his ex-wife Longet after she shot her lover, skier Spider Sabich, in 1976. Williams said about that time: “I had to be there for her. She is the mother of my children. And we never stopped being friends. I still accept her story that the shooting was accidental. Bing Crosby’s wife once told me that she was amazed that I had taken so much trouble to help Claudine after we divorced. I said that anybody would have done the same thing, and she said, ‘Bing wouldn’t.’ I think she meant that Bing was a very rigid guy, and once you had screwed up, you were off his list. Well, that’s not the kind of guy I am.”

Williams’ family has asked that donations be made to the Bladder Cancer Advocacy Network.