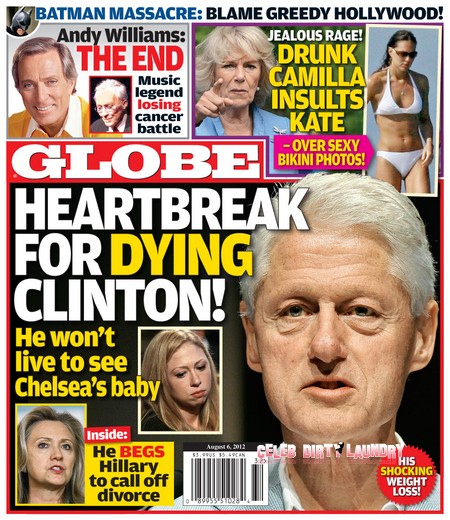 A dying Bill Clinton is heartbroken over his concern that he won’t live long enough long enough to see Chelsea’s baby. Chelsea Clinton and her husband, Marc Mezvinsky, are trying hard to provide Bill with a grandchild but so far, no luck. Amidst Bill’s anguish over not yet being a grandfather he is also faced with a still-bitter Hillary Rodham Clinton looking for a divorce.

Bill has progressive coronary artery disease and his prognosis is not great – he has already had quadruple bypass surgery and angioplasty to treat his ailing heart, and is currently restricted to a strict vegan/fat-free diet in an attempt to keep him alive.  All Bill wants is to end his days peacefully and contentedly – surrounded by loving family including adorable grandkids.  But instead, he faces an angry Hillary seeking revenge for his many years of infidelity, and a daughter who either won’t or can’t give him a grandchild.

Chelsea is now enjoying a busy career – teaching at Columbia University, working for NBC, and pursuing a doctoral degree in international relations from Oxford University… do we smell a run for political office in her future?  All of which proves once again that for the elite in America it isn’t what you know, but who you know.  In any case, since she is enjoying such an active brilliant career, we have to ask if Chelsea really wants to take time out to have a child.  She is only 32 years of age and has not actually expressed any interest in being a mom as far as we know.

GLOBE promises to reveal the whole truth behind this sad story.  Will Bill be able to convince Hillary to hold off on her divorce?  Will Chelsea grow a heart and sacrifice her own personal ambitions to her dad’s wish to have a grandchild?  GLOBE does impeccable research and in this week’s print edition I know I will find the answers to these questions.

On a sad note, GLOBE’s cover warns us that Andy Williams is losing his battle with cancer.  We hope that Andy can hang on and beat the terrible disease but at this point things are not looking good.

One story I can’t wait to read in this week’s GLOBE is about the ongoing feud between nasty Camilla Parker-Bowles and lovely Kate Middleton.  It seems that a drunken Camilla has insulted the Duchess of Cambridge over her sexy honeymoon bikini photos.  As if Camilla isn’t jealous!

This week’s GLOBE promises their usual exciting combination of engaging reading on a variety of topics.  We will get the inside scoop from sources closest to the stories so that we will know the truth.  GLOBE gets right into the trenches and fights to bring the facts to light.  I will be getting my print edition of GLOBE ASAP!