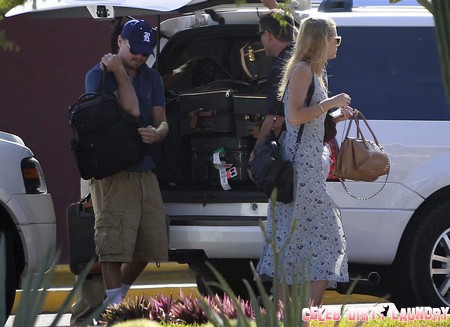 I guess Leonardo DiCaprio has to go back to the casting calls for models at the offices of Victoria’s Secret to find his next conquest. But maybe there is more here than that… as we reported at Celeb Dirty Laundry yesterday, Demi Moore wants Leonado for her next boy toy – could that be the real reason for Leonadro’s break up with Erin?  Does Leonardo want to tame the cougar? Yikes!

A source has told US magazine, that he and model girlfriend Erin Heatherton have broken up after ten months of dating. But as we reported at Celeb Dirty Laundry yesterday, Demi Moore wants Leonado for her next boy toy, so could that be the real reason for his break up with Erin?

“They split a few weeks ago,” the source close to the couple told the magazine. “There’s no bad blood -– they still care about each other a lot.”

Hmmm, would you say that Leonardo DiCaprio has a type? He is what we refer to as a “modelizer”, a term made popular by Sex and the City’s Carrie Bradshaw (played by Sarah Jessica Parker). A modelizer was described on the show, as a man who only dates models, but in my book, a modelizer is so much more than that. It’s an insecure, shallow man who by dating impossibly gorgeous and seemingly unattainable women feels validated in his own masculinity. Does DiCaprio fit this bill? I think so…by dating uber-model Gisele Bundchen from 2001 until 2005, then dating sex-pot Bar Refaeli from 2006 until 2010 and recently Heatherton, I believe that puts him that category. In fact, the only non-model he has publicly dated was Gossip Girl actress, Blake Lively, who might as well should have been a model since she is exceptionally gorgeous and in her early twenties.

So what could have possibly drove Heatherton and DiCaprio apart? I mean, you would think a model with perfect boobs and super long legs and an accomplished A-list actor with a huge bank account could have made it work… but no, the break-up is due to the good old-fashioned “not enough time together” excuse.

“They are both just really busy,” the source continued. “It was just time to move on.“

Hmmm, it’s probably more than that. DiCaprio is getting up there in age, not to say thirty-seven is old or anything, but that seems around the time to start thinking about marriage. However, DiCaprio doesn’t seem interested in it, despite the fact he was in two long term relationships before. Is he trying to pull a George Clooney? Date beautiful women forever and rotate them out without getting married? I’m sure his bevy of model girlfriends don’t appreciate being jerked around about the whole marriage thing.

What do you think, DiCaprio – a serial modelizer with no interest in getting married? Or do you feel he’s just waiting for the right one and the amount of models he’s dated are just circumstantial?