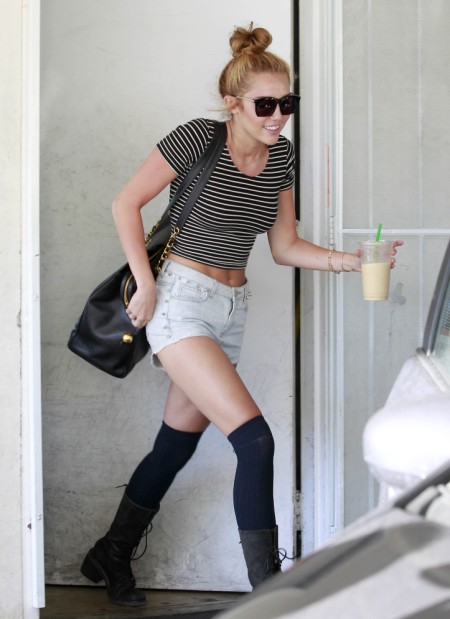 Miley Cyrus’s quest to turn into Julia Roberts in Pretty Woman (the prostitute version, not the Vivian who starts dressing like a lady after Richard Gere takes her shopping) has taken a turn for the worst because fiance, Liam Hemsworth, is ready to send Miley packing if the butt-baring shorts continue.

The National Enquirer reports Liam and Miley recently got into a huge spat over Miley’s daring and fashionably-challenged ensembles and Liam even went so far as to call her a tramp and give her an ultimatum. Miley needs to start dressing appropriately or he’s gone!

“Miley went too far,” said the friend. “The sad thing is that Liam warned her about wearing the der­riere-exposing white denim shorts before. He’s furious with her because his mom Leonie freaked out over the photos. Leonie is a very conservative teacher and the pictures were too much for her. She informed Liam she was very upset and wanted him to tell Miley. She doesn’t want the future mother of her grand­kids walking around with her bottom hanging out.”

Liam, 22, and Miley met on the set of “The Last Song” in 2009 and have had an on-again, off-again relationship for the past three years. And now her shorts seem to have short-circuited Liam’s pa­tience.

“He told her she looked like a tramp,” revealed the friend. “She was defiant, say­ing that she can’t be blamed if somebody wants to take shots of her. But when she found out Leonie was unhappy, it mat­tered to her. She realized that since she’s engaged, her actions affect other people, especially Liam and his family.”

I feel like Miley does get things – not fast, mind you – but eventually self-awareness does kick in. So if this story is remotely true then I’m proud she had the ability to recognize someone else’s feelings. And I can’t help but think this story is more true than not. Can you imagine a future mother-in-law looking at Miley’s outfits and thinking “Look at the lady my son is marrying!”? I don’t think so.

This is positive. It’s another example of Miley Cyrus taking her relationship seriously and becoming an adult. She’s a child star for crying out loud. It’s safe to say she wasn’t given the proper character-building tools while growing up. But she’s trying to learn. I can get down with that. What about you?