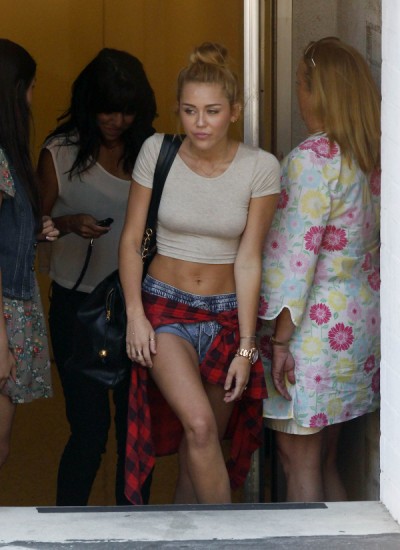 Just as Miley Cyrus’s butt cheeks refuse to be tamed by her short shorts, the Disney Queen refuses to be tied down with children with fiance Liam Hemsworth because she doesn’t want to ruin her rock hard, pilates-loving body.

The non-working actress is still in awe over her engagement to the Hunger Games hottie and recently gushed over twitter saying, “I love being a fiancée” and “will I ever quit staring at my finger???” But according to Mike Wallace at The Enquirer, print edition, the 19-year-old star had to get serious and put her cowboy boot down on Liam’s pressure to produce some babies.

If Miley Cyrus’ sudden engagement to Liam Hemsworth shocked you – brace yourself: The newly-buffed little minx just gob-smacked “Hunger Games” star Liam – who’s hungering for offspring – by warning him to back off.

Said a source close to Miley: “She told Liam, ‘Don’t even think about having kids for at least five years – I’ve worked way too hard for this body!'”

Things got really tense when Liam set eyes on the new baby girl delivered to brother Chris Hemsworth and his wife just weeks ago, and gushed to Miley: “I want us to have a baby now.” Miley shot back: “NO WAY. We’ve already discussed this. It ain’t gonna happen now. End of conversation.”

I’m totally Team Miley on this one. If I thought she was too young to get engaged, than I certainly think she’s too young to start popping out those chillin’. But let’s not stop at five years Miley. Why don’t you give yourself 10? There’s no hurry!

I’m currently thinking about taking that next step and the idea of wrecking my body frightens me as well. Am I vain? Do you even need to ask? So I get where Miley’s coming from. If being narcissistic keeps Miley from becoming a mother too early, then I’m all for it. I think putting the kibosh on kids is one of the smartest things she’s done in awhile. It actually convinces me she’s not just a hooker wannabe tramping around in her daisy dukes and crop tops looking for attention.

The clothes have gotten a little out of hand, no? I understand she worked her ass off (literally) and wants to show the world the amazing results, but sometimes less isn’t always more. You’re only 19 once, so she can get away with her street walker chic looks, but I think she might be going a little overboard. Am I wrong? Take a look at the gallery at some of her recent outfits. Would you walk out of the house like that? Are these kinds of clothes evidence of maturity and confidence to you?