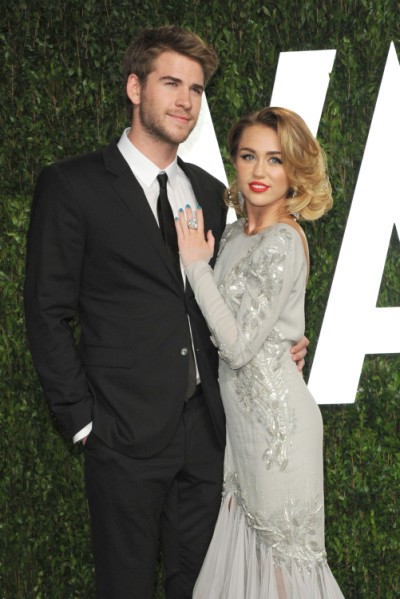 Break out the Cheez Whiz, put the Budweiser on ice and polish off your best flip flops because Miley Cyrus and Liam Hemsworth are engaged, y’all!

The gorgeous couple of three years revealed the big news to People magazine. The Hunger Games star proposed to Miley on May 31 with a 3.5 diamond ring from jeweler, Neil Lane. “I’m so happy to be engaged and look forward to a life of happiness with Liam,” Miley told People.

Miley and Liam first met when they co-starred in the 2009 love story, The Last Song. They broke up for a time in 2010 but they’ve been stronger than ever since they rekindled their love affair. For those of you who think this might just be another ploy from Miley, I’m pretty sure this is the real deal. People is a legit news source. If their reps are saying it’s true then it’s true. Miley sparked wedding rumors when she flashed that rock on her finger in late March but denied that Liam popped the question at that time. Maybe she was just using it to feel out the amount of attention the real announcement would get?

But at 19, is this marriage doomed before it even begins? Today’s a happy day for Miley so I don’t want to shit on her parade too much but 19 is young. True, she’s grown up in a business that ages you prematurely and the singer has gone through a lot but… 19 is so young! Liam’s no better only being 22. But Miley has faced cutting allegations, anorexia claims and been through a major celebrity break up (Nick Jones) before. Is this all a little too much to take on her plate? Obviously Liam has been a stabilizing force for the Disney star. Before he came along she was all “I can’t be tamed” and looking to make some Britney Spears-like decisions. But since Liam entered the picture, the star became more low-key. She spends A LOT of time doing pilates and taking pictures with her dogs and less time smoking all that salvia though she did refer to herself as a stoner at her 19th birthday party. But at least she’s not buzzing her head and flashing her vadge all along Sunset and that’s Liam’s doing. So I hope this couple lasts! Congrats you crazy kids!

What about you? Do you think it can go the distance?