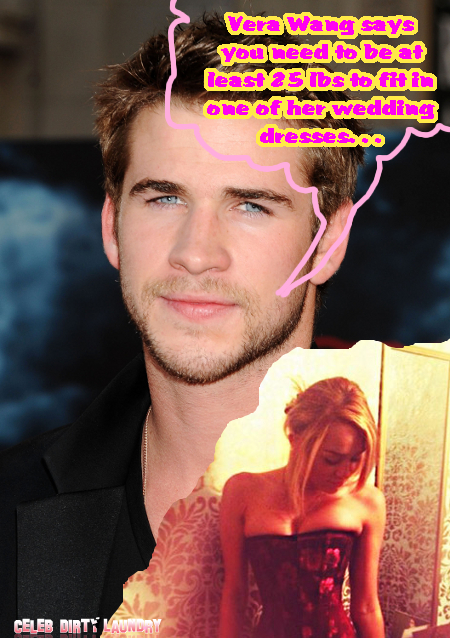 Liam Hemsworth has just asked Miley Cyrus for her hand in marriage, but if Miley doesn’t put on a couple more pounds then Liam might just kick her to the curb before they even have a chance to step foot on the aisle. People close to the Hunger Games star say that he’s worried about her health and fears that she might be “dwindling away” into nothingness. And, as we all know, a person can’t marry nothing!

Cyrus’s quickly vanishing figure is supposedly a result of a recently developed gluten and lactose allergy, as well as a hardcore fitness regimen that consists primarily of pilates. She claims that she’s doing all she can to correct her diet and put on a few more pounds, but after a picture of Miley dressed in a skin-tight corset surfaced on Tuesday, we’re not sure she’s putting forth enough effort . . . for Liam anyway.

Based off the pictures (shown above), it’s evident that Liam’s worries for the actress’s health are plausible ones. He’s only worried for her health and, while sources say “He loves her no matter what,” he’d rather marry someone who is kind not only to him but to her body as well.

Not long ago we reported that Miley Cyrus was anorexic. Again, she attributed her sudden weight loss to pilates and sudden allergies. But I think it’s worth asking, especially since so many people, including her future husband, are commenting on the issue . . . is Miley suffering from underlying emotional problems that are messing with her physical self?

C’mon, girl, eat some Gluten-free cinnamon rolls or something. Pack on the pounds so you can fit into your wedding dress!