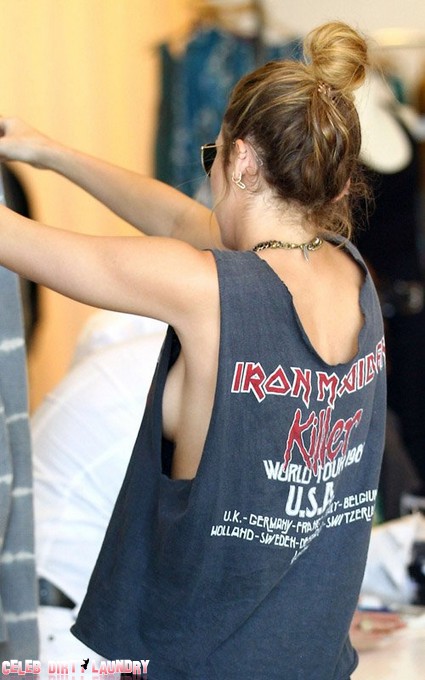 Somebody get this girl a bra! Miley Cyrus has been snapped letting it all hang out on a shopping trip in Calabasas, California. She claims her recent weight loss is due to a food allergy – is she now allergic to underwear as well?

It’s the second time in a week the former Disney star has been caught less than dressed in public. A couple of days ago she left a pilates class in LA wearing a tight mini dress and not much more. Let’s just say there was no VPL. Celeb Dirty Laundry covered the surprise package with photographic evidence here Miley Cyrus Flashes Bare Naked Crotch

Is Miley forgetful? Did Billy Ray Cyrus teach his little girl how to dress herself? Or is this part of her desperate attention seeking campaign now that boyfriend Liam Hemsworth is starring in The Hunger Games which just happens to be the biggest movie in the world? I’ll take the third option. Miley was once a tween pin up thanks to her starring role on Hannah Montana. She had legions of fans, endorsement deals, songs on the charts and movie offers. Now she’s a 19 year old former child star who is trying to reinvent herself and her career. She’s also exercising like there’s no tomorrow prompting talk she’s anorexic. I think we have a case of ‘little girl lost‘.

Let me give you some free advice Miley. No one is going to take you seriously if you flash the flesh just to get some publicity. Head to your local shopping mall and buy some underwear!