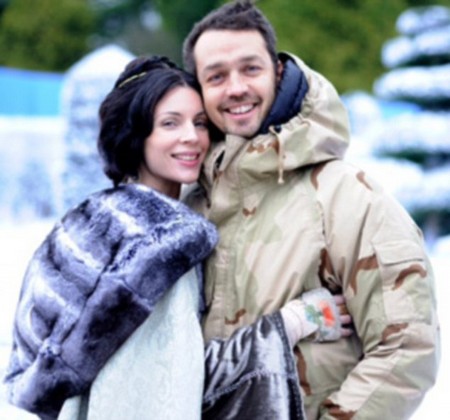 Liberty Ross is the wife of Rupert Sanders, you know, he’s the director that Kristen Stewart had the affair with. Most of the media attention has been on Kristen and everyone is waiting for her (maybe) fiance, Rob Pattinson‘s reaction, but what about Liberty? She and Rupert have been married for ten years and have two children.

When they met she was a very successful model and he was a struggling film maker that won her heart. So much so that she thought nothing of uprooting her life so that she could support his career goals. Just two weeks ago, Liberty was featured in an interview with YOU magazine, where she sadly told how she believed her marriage was in an “amazing” place.

“I think that having been a model and so self-sufficient for those years, I was very ready to get married and have babies. I romanticized domesticity for a while, and loved having a shopping list of groceries stuck to the fridge for the first time. But moving here (from London to LA) and starting a life all over again was a lot harder than I had anticipated. I just didn’t think it would be as isolating and daunting as it turned out to be. I can honestly say that it took me five years to feel happy here. I went from the glamour of working with Karl Lagerfeld and John Galliano to living on an isolated hilltop, with my husband gone most of the time. ‘I would never say out loud that I am raising my children alone, but a lot of the time it has felt like that. But that’s why everything feels so amazing now. We rode through the really hard times and we stuck it out.”

It sounds like she had absolutely no idea what was going on right in front of her eyes, as she was cast as Kristen Stewart’s mother in Snow White and the Hunstman. Liberty has yet to comment publicly. She tweeted the word “Wow” right after the news of her husband’s infidelity broke but then quickly deactivated her Twitter account.

Rupert offered up a very public apology to his wife and children yesterday. Do you think she’ll try to work through this situation with him or is it time to throw in the towel? Tell us your thoughts in the comments below.