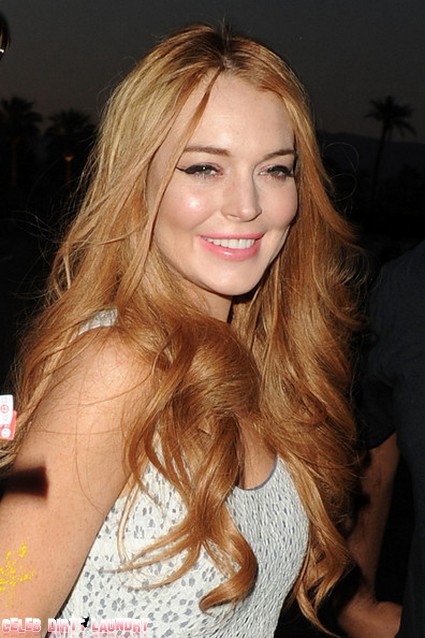 Lindsay Lohan was the troublemaker and she started the fight – that’s what a witness is saying about the redhead’s latest run-in after dark. LiLo and her dad Michael Lohan were involved in a skirmish at a hotel on the Sunset Strip on Wednesday night. And it seems the finger of blame is being pointed at everyone’s favorite former jailbird.

Celeb Dirty Laundry covered the incident here Lindsay Lohan and Michael Lohan Involved In ANOTHER Bar Fight Well, there’s been a few developments according to TMZ so we’ll bring you up to speed on where this potential legal disaster for Linds stands…Remember she’s only off full probation. The LAPD is watching her every move very carefully.

The witness who has spoken out about the incident was with the other girl involved in the altercation. She says it was a misunderstanding while they were at the Smoke and Mirrors club inside The Standard Hotel. She says Lindsay got annoyed when she thought someone had bumped into her. The girl in question denied the bump and suggested maybe it was someone LiLo was hanging out with. She pointed to one of the men – which just happened to be Michael Lohan. The actress snapped back  ‘That’s my dad … why would he bump me?‘..the girl replied ‘You go clubbing with your dad?’

That’s when all hell broke loose according to the witness. The Mean Girls star started swearing and threw a drink at her face. Michael knew it was trouble, grabbed Lindsay and got out of there quick smart. He denies the drink throwing saying any beverage throwing was aimed at Linds. So we have another case of she said, he said, she said. What will the Authorities make of this?