Lindsay Lohan And Sam Ronson “Snuggle” In New York: Are They Back Together AGAIN? 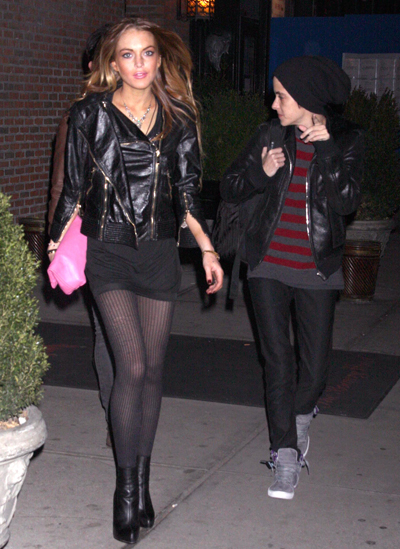 It looks like Lindsay Lohan‘s diabolical plan to win her ex-girlfriend DJ Samantha Ronson back has paid off!

According to X17, the two were spotted “snuggling” and holding hands at a nightclub in New York this week.

Said a spy: “Lindsay and Sam were whispering and laughing and they left the club holding hands. They didn’t care who saw them, and they definitely seem to be back on. It was just like the old days — they couldn’t get enough of each other!“

If you remember, Lindsay and Sam dated for 2 turbulent years before breaking up in 2009, only to reunite and then break up again in 2011. Related: Is Lindsay Lohan Falling In Love With Gerard Butler?

However earlier this month Star via Celebitchy.com reported that Lindsay was angling to win Sam back and had been asking her for a “second chance” for months. And now that Sam has recently launched a singing career that she probably could use some publicity for, could she have decided to get back together with her old flame? It sure seems that way!