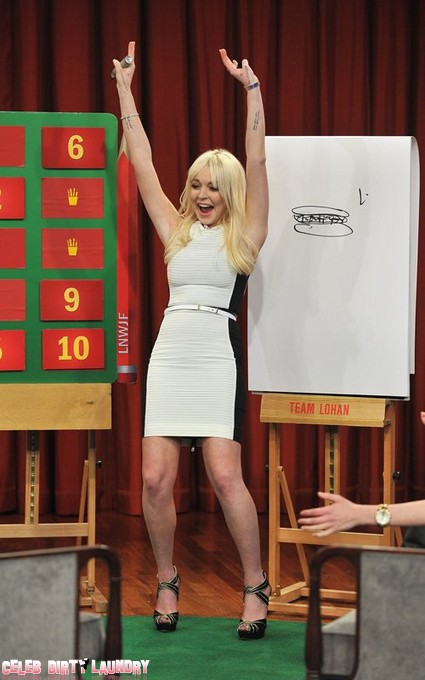 Another day, another desperate attempt by Lindsay Lohan to revive her washed up Hollywood career. Last night she paid Late Night with Jimmy Fallon a visit. All we can say is the trainwreck continues…

The part time actress (when she can get a gig) was still sporting the platinum blonde hair which looks more like straw and her face was slightly bloated. Her voice is still very tired. It sounds like she needs a good nights sleep. But Jimmy took it easy on her. He buttered her up saying how great she looked and what a great actress she is. At least LiLo bought it.

There was plenty of proof Lindsay has no shame. She admitted hustling for the hosting gig on this weekend’s Saturday Night Live. ‘I kept asking him. I wasn’t giving up’ Her persistence finally paid off and an offer was forthcoming from Producer Lorne Michaels ‘He was like, ‘What about March 3?’, I’m like, ‘I’m free!’ I think Lorne saw a ratings bonanza! She then asked Jimmy to stop by on Saturday night to support her. What is that about?

The former child star also talked about her big comeback role as Elizabeth Taylor in a new Lifetime movie before playing a game of pictionary with the audience. She’ll do anything to get her face on TV!

On Thursday morning her one on one with Matt Lauer aired on the Today Show. Celeb Dirty Laundry covered it here Clean And Sober? Who Is Lindsay Lohan Kidding