Photos of Lindsay Lohan On Set Of Liz and Dick Have Surfaced! 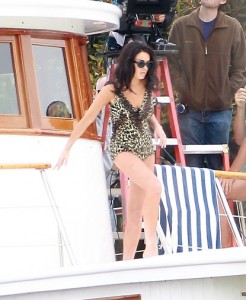 Lindsay Lohan is officially working! Like she is actually on set, in full garb and ready to take on the role of Elizabeth Taylor. Shocking, right? Think of it, at this very moment she IS Elizabeth Taylor. The now employed starlet was spotted on the set of Liz and Dick wearing a one piece swimsuit and showing off her newly darkened locks to match that of the late bejeweled icon.

Let’s just say that Lohan’s rep Steve Honig is fabulously excited that Lilo is finally garnering some positive press. He reportedly told the NY Daily News, “I was standing there last week for publicity shots and prep when Lindsay and Grant walked on set for the first time in full makeup and costume, and it took everyone’s breath away. It was like being on set with Elizabeth Taylor and Richard Burton. It was really a moment.”

Well it definitely could have been “a moment”, but she better have a lot of moments because by the end of this shoot, the end product is what everyone is going to be judging her acting ability on. Peeps want to see Lindsay ACT again. They don’t want to see her masked by prescription pills, like her SNL performance.

I’m interested to see Lindsay’s chemistry with her co-star Grant Bowler. I’m also interested to see if she lasts through a whole filming without any complaints of her being late to set or giving diva attitude.

One thing is for sure. Lindsay looks fab in a swimsuit!

Check out other photos from Lindsay’s day on the set of Liz and Dick below.