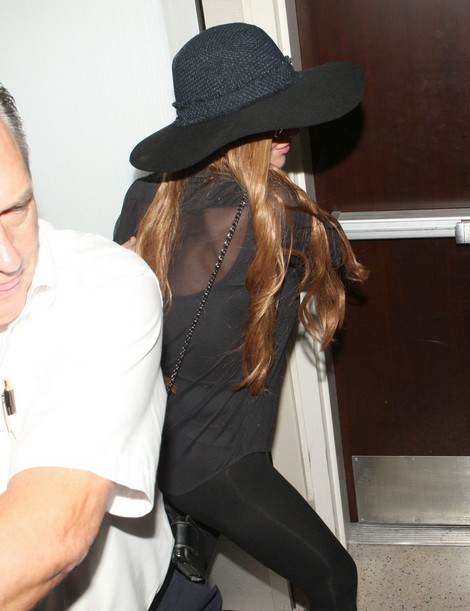 Lindsay Lohan might just have allowed her criminal tendencies to go too far this time.  Police have just revealed that Lindsay Lohan is now formally a suspect in the theft of $100,000 worth of watches and sunglasses.  What’s even worse is that Lindsay’s assistant, Gavin Doyle, is also a suspect and the lawyer representing them both is refusing to allow his clients to talk to law enforcement!

Obviously Lindsay and Gavin have what to hide and are hoping that their legal representation can protect them from the law.  They are wrong – it won’t.

Lindsay was originally an informal suspect in the robbery of her host, Sam Magid, but after some funny business Sam decided to withdraw his police complaint.  Strangely, Sam’s withdrawal of his police report seemed to coincide with contact the robbery victim had with Michael Lohan.  Hmm…  Wonder if Michael made Sam an offer he was afraid to refuse?

TMZ exclusively reports: As TMZ first reported, Lindsay was at the Hollywood Hills home of Sam Magid a week ago when Sam called the LAPD and reported a jewelry theft. We’re told Lindsay has been at the house frequently, including at an all-night house party a week ago Sunday.

Law enforcement sources tell us … Lindsay and her assistant Gavin Doyle are both suspects in the theft.

Now here’s the twist … We’re told Sam has recanted his story and now says nothing was stolen. But our sources say cops are not closing out the investigation because they believe they have independent witnesses who can finger Lindsay and Gavin as the thieves.

Sources tell us … LAPD detectives contacted the lawyer for Lindsay and Gavin today, asking for an interview with the two suspects but the lawyer rejected the request.

It’s unclear why Sam — who is insanely wealthy — suddenly changed his tune.

One final thing … This is really bad news for Lindsay, because she’s on probation for the theft case involving the necklace at a Venice jewelry store. She could go to jail if she violates probation by stealing more jewelry.

Celeb Dirty Laundry reported on how Lindsay’s fleeing Los Angeles right after the robbery made her look very suspicious.  Well now the police have confirmed that Lindsay is indeed a suspect and we wait for them to prove that she is involved in the heist.   Based on Lindsay’s past behavior we have no reason to doubt her guilt.