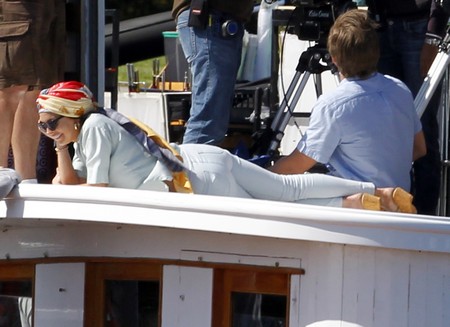 It’s been awhile now since Lindsay Lohan has starred in a film, and although she is currently working on ‘Liz & Dick,’ she has just signed on for another role alongside a guy name James Deen who has been in apparently, something like 2,000 pornographic films.

This new film Lindsay will be starring in is called “The Canyons” and is directed by Paul Shrader, who’s better known for his work in “Taxi Driver”. Lindsay will basically finish “Liz & Dick” and jump right into “The Canyons” with James Deen. The movie is supposed to be sexy, dark and controversial, good thing Lindsay can relate to at least two of those  – and it’s not dark or sexy.

The announcement came from script writer Bret Eastion Ellis who tweeted “James Deen and Lindsay Lohan have been cast in ‘The Canyons’. And I am beyond thrilled that James Deen and Lindsay Lohan will be playing the parts of Christian and Tara in The Canyons by BEE. Could not have dreamed of a better cast. Lindsay nailed it…” I really have no idea how good Lindsay will do in the film, basically if she stays sober long enough that will be a miracle in itself.

The makers of the film have said that the film is about five people who are in their twenty’s trying to do whatever they need to do to have love, sex and power in 2012 Hollywood. It doesn’t really sound all the interesting to me.

Our source reveals, “The appeal of this role for Lindsay is getting to work with Paul Schrader. He’s an amazing filmmaker and it’s an amazing role for her. She couldn’t be happier. Although if she’d had a problem with James Deen, she wouldn’t have pursued the role.”