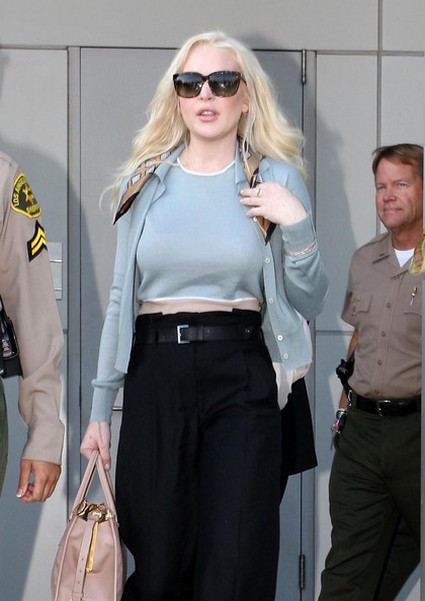 Back in December 2010 Lindsay Lohan got involved in a fracas with rehab employee Dawn Holland, aka Dawn Bradley, when Lindsay tried to sneak back into the Betty Ford Center past curfew. Dawn was fired from Betty Ford for going public about the incident and betraying patient confidentiality – she also made a police report and then sued Lindsay. Dawn claimed Lindsay roughed her up in the lawsuit filed last July – claiming damages in excess of $1 million from Lindsay’s alleged assault and battery.

Speaking about the night Lindsay and her booze buddies tried to sneak back into Betty Ford, Dawn said:  “I could smell the alcohol on all of them and I couldn’t get Lindsay to cooperate. She was very, very angry.”

Dawn claimed a belligerent Lohan twisted her left wrist in her struggle to wrestle away a phone she had been holding – Dawn was going to call and rat Lindsay out and that triggered her attack.

Now Lindsay’s lawyers have rejected Dawn’s claims formally by filing a response on January 10 at Riverside County Superior Court. Lindsay’s lawyers claim that she was merely acting in self-defence and owes Dawn nothing at all.

TMZ has the exclusive:  It took her six months, but Lindsay Lohan has finally fired back a response to the Betty Ford worker who claims LiLo assaulted her — and to no one’s surprise … Lindsay is pinning all the blame on her.

Lindsay allegedly got into it with Dawn Holland (now going by Dawn Bradley) back in December 2010, while Lindsay was in rehab. Bradley filed a lawsuit last July against Lohan for the alleged incident, claiming assault and battery.

Attorneys for Lindsay filed their response in Riverside County Superior Court on January 10, claiming the entire incident was provoked by Bradley … so Lindsay shouldn’t have to pay her a cent. Lohan claims anything she may have done was done in self-defense.

Lohan also wants the court to force Bradley to pay for her court costs, plus any other relief the court sees fit.

Dawn might have exaggerated the extent of her injuries at Lindsay’s hands but we have no doubt that she WAS assaulted by Lindsay that night.