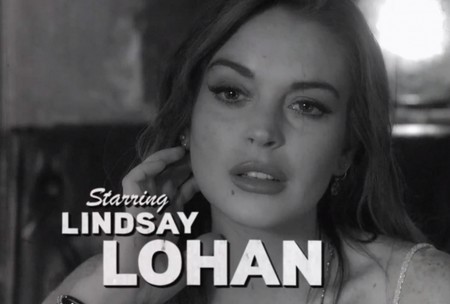 The f**k? Lindsay Lohan is trying to simultaneously reinvent her professional image while competing against Amanda Bynes for world’s most dangerous driver. I’m not going to predict the outcome, but I can offer some insight to the “I’m a serious actress” act she’s got going. After the last of her court cases ended, Linds filmed the Lifetime biopic Liz & Dick, which follows the romance between Elizabeth Taylor and Richard Burton. I love Elizabeth Taylor and have to think she is rolling in her grave over this one. It comes out on 25 November and I think the premiere will pass as quietly as any other Lifetime movie—that is, with absolutely no buzz. She also worked on an indie flick called The Canyons, which will be the focus of today’s Lilo discussion.

The Canyons is described as a film neo noir, which means we’ll see anti-heroes (main characters who, instead of sympathizing with, we’ll observe them struggle and make things worse for themselves), crime, and cynical detectives. It’s the newest phase of evolution from the crime dramas of the 1950s and 1960s. It’s neo because we’ll enjoy it in color and see the characters interact with modern technologies. All that sounds great—an independent crime drama in which the characters are doomed from the start, but what the hell is up with the movie trailer? It’s in flickering black and white, with a Hawaiian-y font, and images of nudity, sex, and a lot of distrustful glances from Lindsay.

The movie trailer features this description: “In the canyons everything goes where the sex is as cheap as the budget and the only way out is death. Prepare yourself for a shocking new vision. [Lindsay’s character Tara] She’s sweet as sin. Take a trip to The Canyons.” Apparently the title is a play on The Hills, because the poster reads “It’s not the hills.” (Thanks for clarifying!) Pieced together snippets reveal a bit of plot: strangers meet, explore sexual desire, and ultimately turn violent. Which sort of sounds like Salo: 120 Days of Sodom (but without fascists and probably less morally disturbing). Of course, all of these contrary promotional bits are doing a great job at stirring up buzz (I’m reporting on it, aren’t I?), and the film could be totally incredible. Time will tell. One thing’s certain: I’m not betting money that this will be Lindsay’s big comeback.