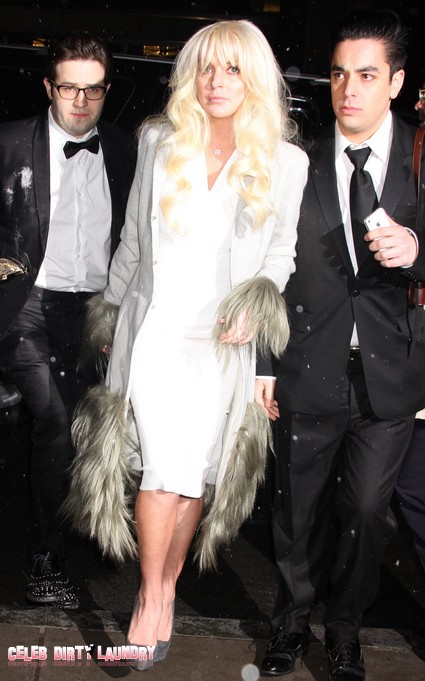 Talk about rolling over in the grave and Elizabeth Taylor comes immediately to mind – now that Lindsay Lohan has been given the nod to play the iconic actress in a new film based on Taylor’s long-term romance and two marriages with Richard Burton. What are they thinking in Hollywood? Why not have Lindsay Lohan play Hilary Clinton or Queen Elizabeth II – she is just as well suited for those roles as to play the great actress, Dame Elizabeth Taylor.

Lindsay had to beat our another dud, Meagan Fox to win the role in the made for TV movie, ‘Liz and Dick.’ Apparently Kate Winslet was interested at one point in the part but she wised up. I guess that when Kate realized that they were seriously considering hiring Lindsay and Megan for the role, she knew the film would be a joke and opted out.

FitFatCeleb has this to say:  Ughh this is digusting news! Lindsay Lohan the definition of trash will take on the role of the late screen legend Elizabeth Taylor in a Lifetime project ‘Liz and Dick, which will focus on Elizabeth’s tempestuous marriages to actor Richard Burton. What a joke! Perhaps they can get Spencer Pratt to play Richard wouldn’t that be fitting? Not!

Lindsay’s has been hauled in for numerous court appearances, brief jail stints and has undergo rehab treatment for alcohol and substance abuse. All this has taken a back seat to her career in recent years, Lindsay has been handed a legal caveat in relation to the role.
If she stays on the right side of the court and obeys the judge’s orders relating to her 2007 conviction for driving under the influence (DUI), she will be allowed to take on the part of Elizabeth in the movie, ‘Access Hollywood’ reports.

The project – which is set to be produced by Larry Thompson – has been in development since shortly after the death of the ‘Cleopatra’ star in March 2011, when she passed award from congestive heart failure at the age of 79.

Last month, Lindsay was praised by Los Angeles Superior Court Judge Stephanie Sautner for the work she undertook at the Los Angeles County Morgue as part of her sentence for breaking her probation in relation to the 2007 DUI incident.

She told her: “I’m pleased to say she’s done it all. Just keep doing what you’re doing, you appear to be doing it well. The probation officer has written a favourable report, as has the volunteer centre.”

Anyone wanna take any bets on her NOT staying well behaved and NOT getting the role?

The film’s executive producer Larry Thompson should be proud. Perhaps his biopic on one of Hollywood’s greats will air the same week as its star appears on another Playboy cover – or even better, gets arrested for shoplifting… again. Are you pleased that Lindsay will be playing Elizabeth? Who do you think would have been better for the role?