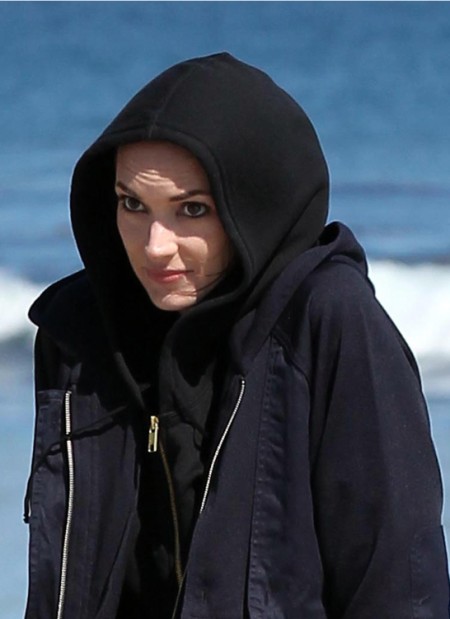 It’s been eleven years since Winona Ryder’s sticky fingers made her the butt of countless jokes over trying to make off with $5,000 worth of booty from Saks Fifth Avenue and it looks like old habits die hard. Winona dressed up in her cat burglar best yesterday while spending a day at the beach in Malibu with a friend.

A little harsh? Oh come on! I’m just saying… if I was known for taking things I wasn’t supposed to I wouldn’t go around dressing like Joe Pesci in Home Alone. How is she going to win Johnny Depp back now that he’s single? If you think I’m going to let that go, you’re sadly mistaken. Johnny and Winona FOREVER!

In other Winona news, did you know Charlie Sheen is now taking credit for her name? Winona’s real last name is Horowitz and E! News reported that in plugging his new show, Anger Management, Charlie said his winning touch suggested she change it to Ryder when they were growing up in the business together. “We were listening to the Doors, to ‘Riders on the Storm.’ [Winona’s] real name is Horowitz,” he explained during an appearance on CenterStage. “And I said, ‘You know, I’m thinking Winona Ryder sounds cool,’ and she was like, ‘Yeah!’ [She] never, never gave me credit to this day!”

Winona and Charlie were in Lucas together. Do you remember that movie? Such a classic! Winona had to play the dorkie band geek when she was more beautiful than anyone in the movie. Charlie played a rich, spoiled LA jock which was probably so close to home he didn’t have to bother reading the script. I hope Winona starts making more movies. I was obsessed with her growing up. Still am, obviously! She’s got Tim Burton’s Frankenweenie coming out soon but it’s only a cartoon. I don’t know why people are so nervous to put her face on screen again. She’s getting older but that porcelain, fragile beauty is still there. So fragile! Can’t you see it in the pics? The media really screwed her up. She was screwed up before the shoplifting incident, clearly, but it’s like she still hasn’t recovered from the exposure. Luckily for Winona, she didn’t grow up in Hollywood during TMZ and paparazzi-crazed highway chases. She wouldn’t have been able to cope, right? I think Johnny needs to give her a hug! I told you, I’m not giving up!