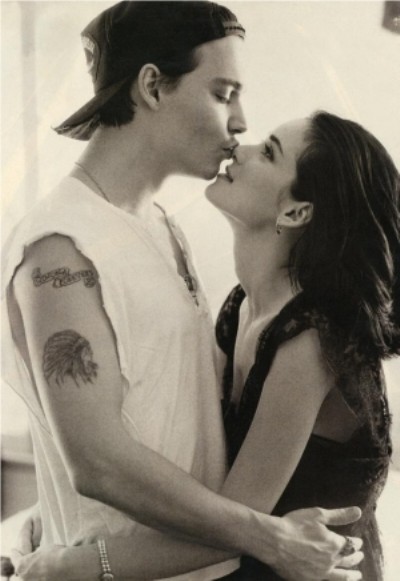 Johnny Depp’s 14-year relationship with Vanessa Paradis is finally over leaving room for the most eligible bachelor in Hollywood to play again, but will his close proximity to old love, Winona Ryder, get those old feelings coming back?

OK, bear with me here. This is a stretch, but that doesn’t mean it can’t happen. Were you as obsessed with Ryder and Depp as I was? They were like the original Kristen Stewart and Robert Pattinson. They were young and volatile and dark and esoteric and cool. They were so freaking cool! And then it was over. Depp went on to supermodel Kate Moss and 19-year-old Winona was left to wade the cruel waters of fame alone and lost. We all know what happened. She stole some things, got in trouble, whatever, it’s over. He went on to cheat on Vanessa Paradis probably with Amber Heard and his publicist Robin Baum and, most likely, many others.

But now, Depp and Winona are mixing in the same circles again. Winona just finished filming Frankenweenie with Depp’s bestie Tim Burton. Depp and Winona got together while filming Burton’s Edward Scissorhands. Are you thinking what I’m thinking? Will Burton try to hook that up again? Burton and Winona will be spending time together promoting the film. How could Johnny not come up? Johnny’s still got the Winona Forever tattoo on his arm, though it’s been changed. They’ve had their issues since they parted. I’m just saying… if the gossip fairy wants to make my day, month, year and life, he would bring those two back together again. Don’t you agree?

Is this too out of left field? For the ordinary people, I might say yes. But this is Depp and Winona. They march to the beat of their own drums and I wouldn’t put it past them to rekindle their love affair 20 years after they ended it. His tattoo might say Wino now, but it still says forever. Don’t pretend like you wouldn’t want to see it happen! But I wonder why Depp wasn’t in Frankenweenie. He’s in every Burton film. Did he pass because Winona joined? I hope not. That would ruin my theory so we’ll just say he was too busy!